The time which passes during this confinement linked to the Sras-cov-2 virus, or covid19, gives us the opportunity to present you some Nice sundials (French Riviera). Discover this heritage from Rauba Capeu, Masséna high school etc ... with images, virtual tours and an interview with specialist Roger Torrenti... 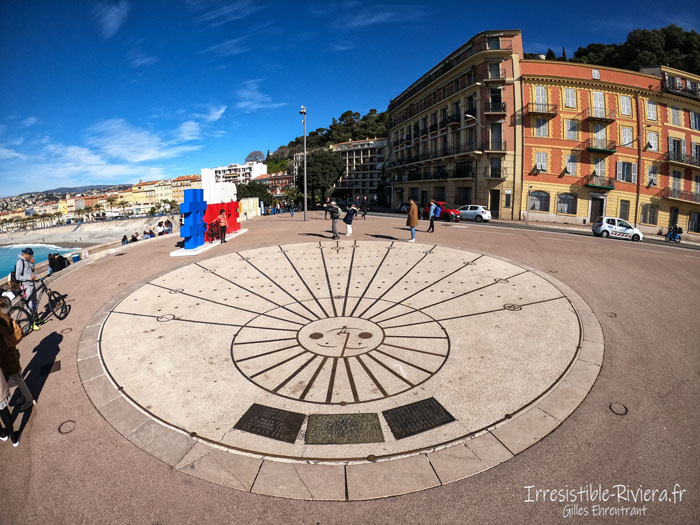 The sun allows life on earth, ideally positioned, neither too far nor too close, it offers, with its rays, free energy essential for vegetation and human activities. The solar star also makes it possible to be located in space. Its trajectories offer valuable information to navigators. It also allows quite incredible geometric calculations. It is for example possible to know the height of a tree or a building thanks to the sun. How? By positioning a stick and waiting for its shadow to equal its size, it is then possible, at the same time, to measure the length of the shadow of the tree or building to simply know its height. Thales discovered this method to determine with exactitude the height of the great pyramid of Cheops. The sun also makes it possible to measure time, to be located in space time, by analyzing the displacement of the shade of the sun on a system called sundial. This one is composed of a graduated surface (fixed or transportable, on the floor or on a wall ...) and an object (called gnomon or style) whose shadow is cast to indicate the time. Even without a sundial, the sun in a fairly empirical way makes it possible to evaluate time: the earth is a sphere (360°) which rotates in 24 hours. 360 ° divided by 24 is 15 ° per hour. The sun therefore travels 15 ° every hour. It is easy to view a 90 ° right angle. The half is 45 ° ... which we divide by three to arrive at 15 ° "distance" that the sun travels in an hour ... ..

Equation of time: what is time? what is it for ? different hours? 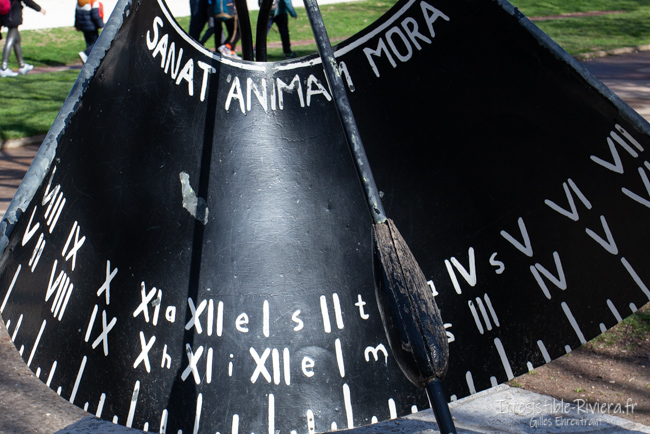 Note that there are several "time concepts". The official local time (summer or winter time version) determined by a time zone is not the same as GMT universal time. The time of sunrise and sunset is not the same according to our "longitudinal location". The difference depending on the location, can be around 40 minutes in mainland France. The sun rises earlier in Nice (7 ° east longitude) than in Brest (4 ° west longitude). Conversely, it will be necessary to wait later, in the official time of the metropolitan France time zone, in Brest than in Nice to observe and photograph a sunset. Universal time (GMT) is identical everywhere in the world and allows synchronization of all kinds of human, scientific, transport and even military activities. Time control optimizes human organizations. For a long time humans only knew the time thanks to the empirical observation of the sun. Then ringtones, bells, alarm sounds allowed this information to be disseminated. In Nice, the Saint-François tower, for example, made it possible to diffuse the time by the ringing of its bell. Particularity of Nice, at midday sharp, the cannon of the castle hill sounds to signal midday to the whole city. More than a century of history has made an English Lord eager to bring his wife home for dinner. Tradition inscribed in municipal marble by Malaussena, former mayor of the city. Watchmaking and watches invented in the 15th century did not become popular until the 20th century. 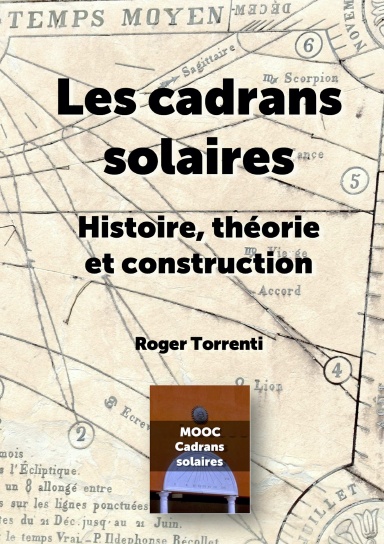 A real bonus, the interview (in french) with a renowned specialist from Nice, an international specialist in sundials, in the person of Roger Torrenti. We had the opportunity to attend one of its conferences in Nice in January 2020. Mr Torrenti, a native of old Nice studied at Lycée Masséna, as well as his preparatory classes (math sup and math spé) and then pass the engineering competition of the central school of Paris. After a rich and varied professional life, he devoted himself to one of his passions, sundials and today offers to share his knowledge. Rather than long developments, too technical here, we recommend, in addition to watching the video on this page, to consult the work of Mr Torrenti through:

For a better rendering: choose the maximum definition by clicking on the small toothed wheel .
https://youtu.be/IHxHDK9TqHE

The different sundials of Nice

The beautiful city of Nice therefore has several sundials. We have selected a few that we present to you on this page. From the smallest to the largest and from the simplest to the most sophisticated, this tool dating back to the origin of the times offers, except overcast time, to Nice and passing tourists ...

Located at the end of the "Quai des Etats Unis" in the direction of the port and at the foot of the castle hill, this large sundial, a few meters from the sculpture #IloveNice, uses the user's shadow to deliver its time. This place, very touristy and frequented, allows a 180 ° view of the Baie des Anges. You will pass by there for your jogging by going for example towards the cape of Nice or en route towards Lou Passagin.

A graduation allows you to know precisely the time of day. This sundial is the work of B Milet [Cal], P Février [Cog] and R Capron [Fec] was installed on June 21, 1981 day of the summer solstice, theoretically the longest day of the year. Following our questions concerning these names, Roger Torrenti indicates to us by email: "Bernard Milet did the calculations (Cal) and was a fairly well-known astronomer (he officiated at the Nice observatory from 1965 to 1990 and died in 2014 in Nice). A Capron could refer to Roger Capron, a renowned ceramist who lived in Vallauris and who was very interested in sundials (he probably designed the sundial artistically). In this case (Fec) could refer to Manufacturing and c ??? As for P February (Cog for general design ??), no traces… "

Three metal plaques (visible in the photo on this page) are located at its foot:

Rauba Capeu's dial is made up of metallic pieces, a priori made of copper, embedded in the ground about 13 meters above mean sea level (MSL). Twelve branches start from the center of the sundial, numbered from 7 to 18. They indicate the time and reach the peripheral circle of the sundial. Note between line 12 and 13 the indication of the North Pole and therefore of the North Star. Towards the south 12 other small lines point towards the sea. A constellation of points is scattered over the system on 6 floors starting from the center.

It is a truncated equatorial dial created by A. Németh, dating from the 1980s. A double graduation of the hours, one for the summer ("aestas") and one for the winter ("hiems"). The motto says "Sanat animam mora" which means "Time cures the evils of the soul", which seems particularly right!

This rather atypical little sundial is located in the southwest sector of the hill plateau, at the athletic tracks

Sundial of the Masséna high school

Located under the clock tower at the southwest corner along Promenade du Paillon, the sundial is very easily visible from the street because it is at eye level. It was made in 1929 by Mr Schaumasse on a marble slab. Numerous curved designs and information dot the dial. A motto indicates "Horas ne numerem nisi serenas" which means "That I do not count the hours except the serene ones". 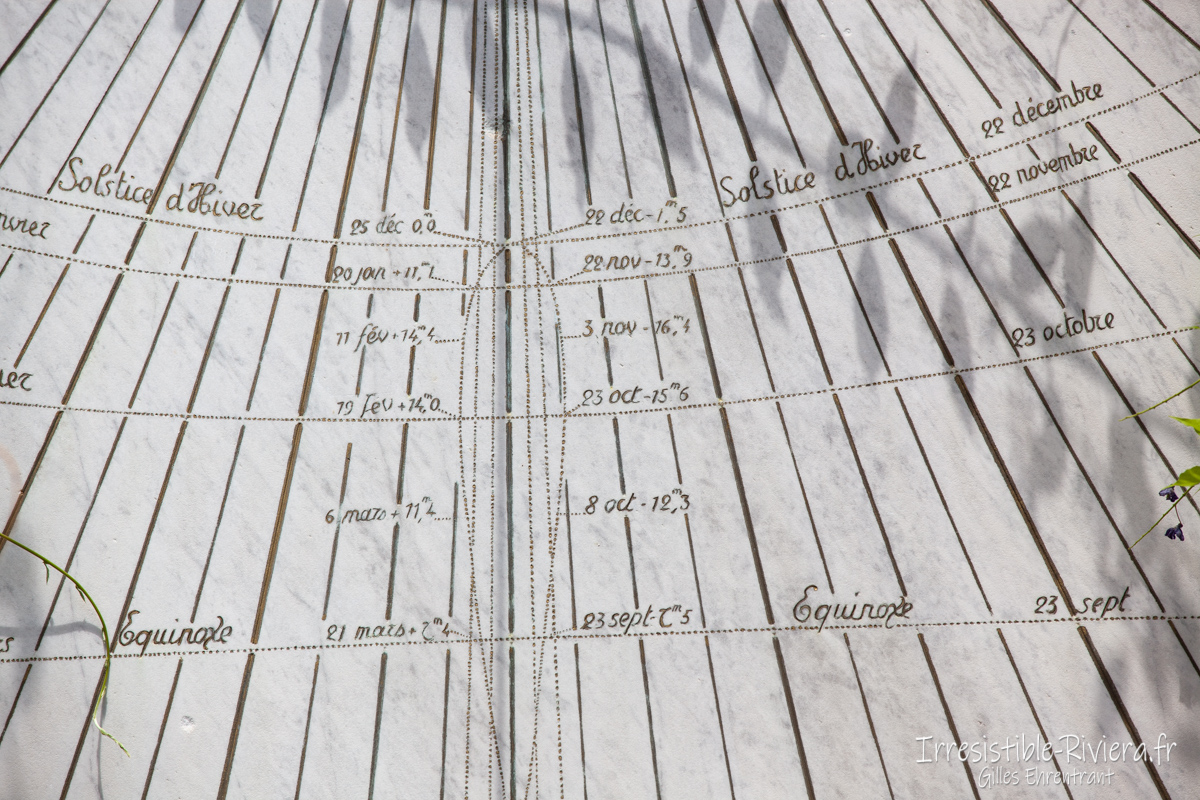 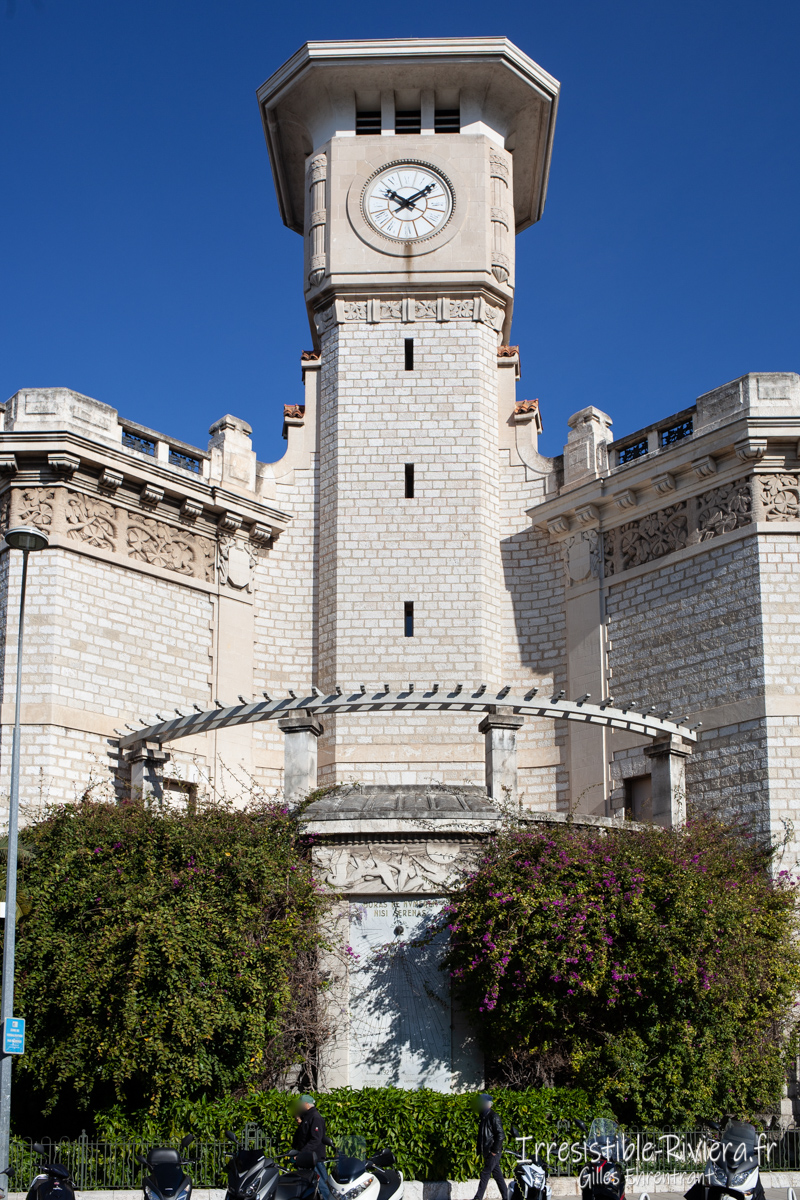 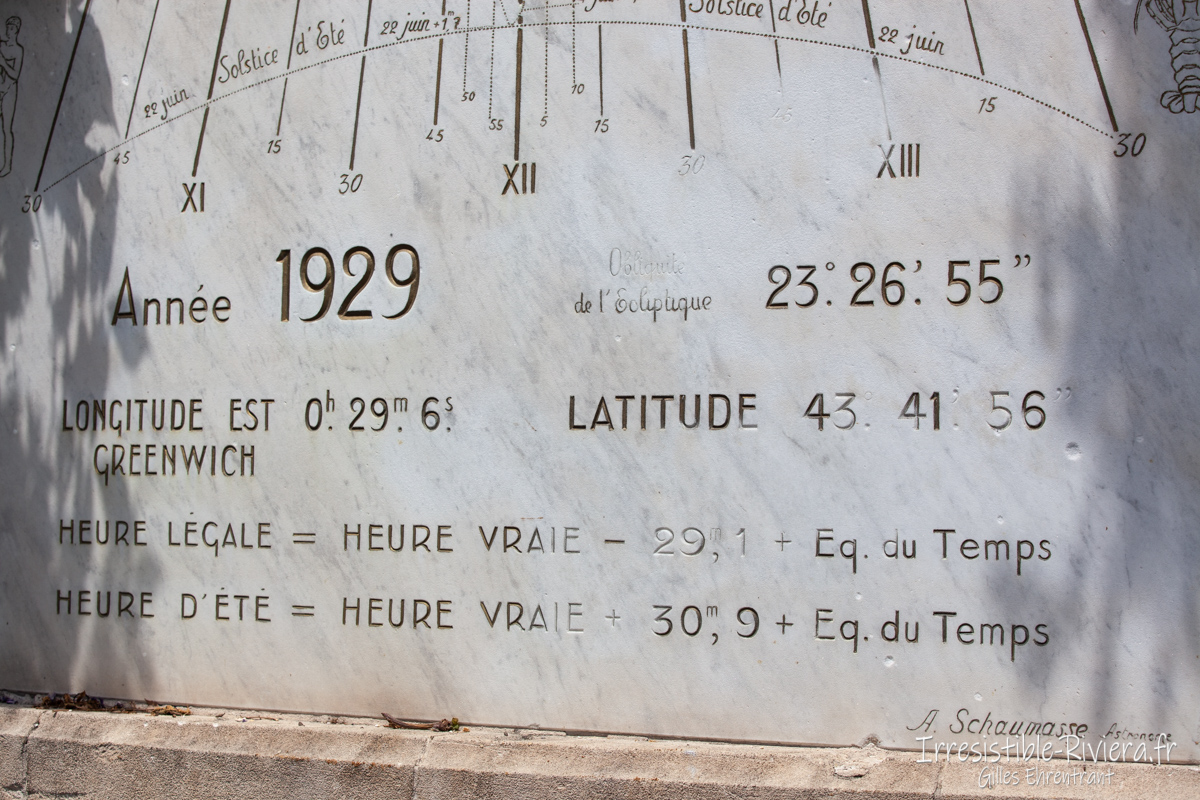 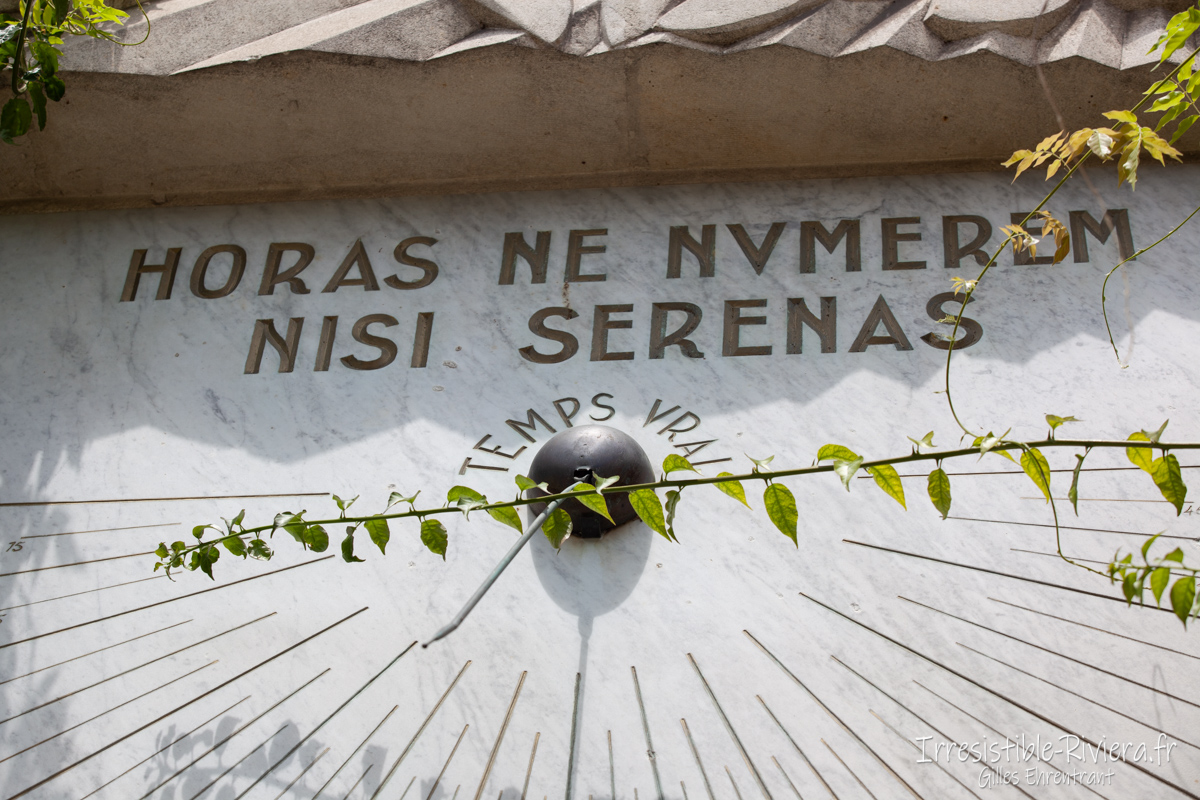 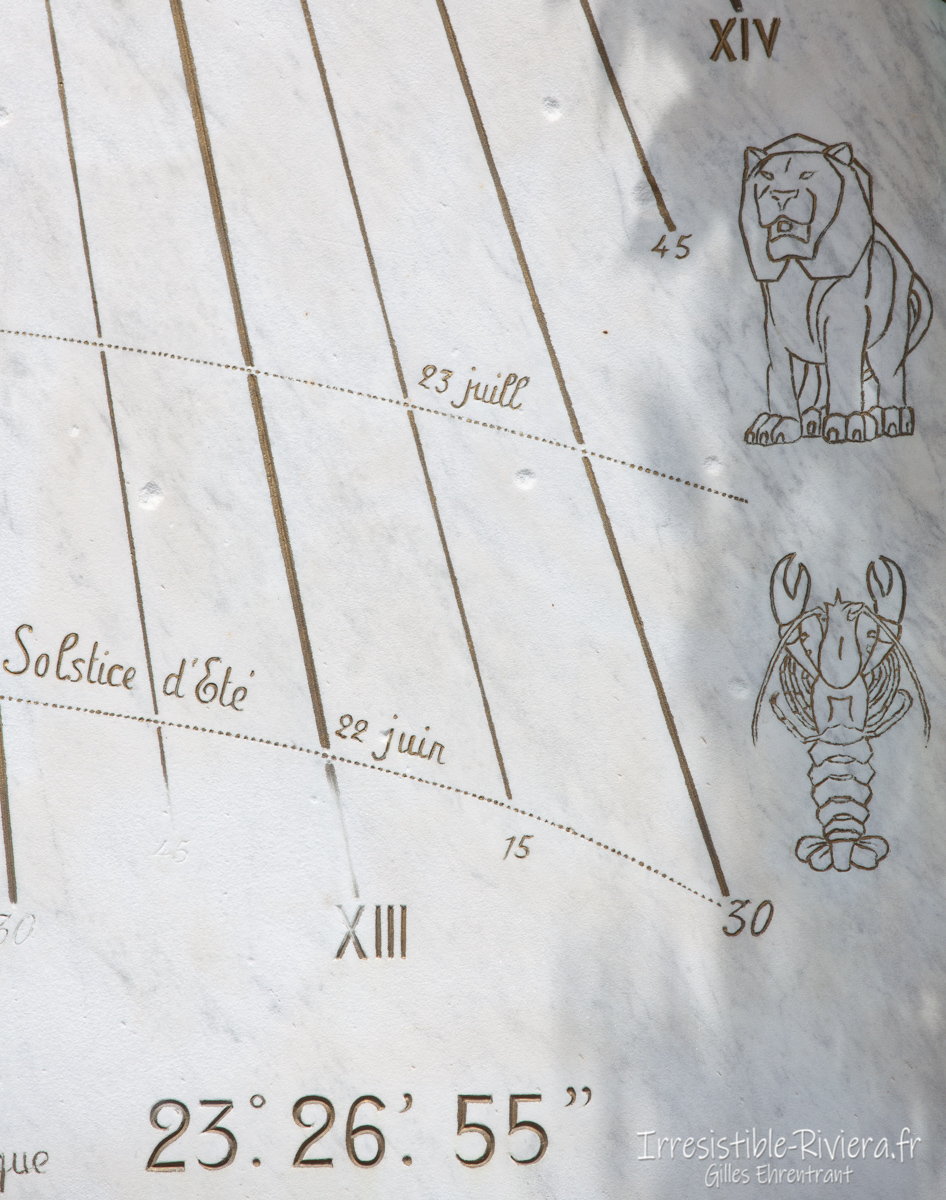 Sundial in Durandy Square on the Romain Gary Library

Facing south, south-east, the dial on the first floor of the beautiful library R Gary looks towards Durandy Square, recently redone to accommodate the eponymous underground tram station. It lacks the gnomon and is therefore unfortunately not usable as it is. Its motto is "Puo ben errar sulla campana il ferro ma quando luce il sol io non erro" which means: "The iron can be wrong on the bell, but when the sun is shining I am not mistaken". Date appearing on the sundial MDCCCLXXVI in Roman numerals which means 1876.

Several sundials can be found in the garden of the Cimiez monastery, renowned for its beautiful roses in spring, which makes young couples happy for their wedding photos. The building displays four sundials visible from the outside. Entering the garden through the main portal, just turn left along the south face of the cloister. Only one, still in good condition, attracts the attention of visitors even if it is partially hidden behind the lush local vegetation. A second is just above the first, a third a little further to the right (10 m to the east). The last one is inside the courtyard but remains visible from a distance through the gates. The main dial displays the date of 1876, latitude 43.42 and the name of Idlephonse Récollet. The magnificent style (or gnomon) ends with a perforated circle which lets light pass through to indicate the time. The text below explains how the sundial works: "The lateral graduations to the months announce the movement of the sun in the Ecliptic. The Average Time which goes with the clocks is a long 8 between the tropics. The single bright spot marks this time on the punctuated lines from June 21 until Dec 21. and on the corresponding lines from 21 Dec until 21 June. The straight lines above the Winter Solstice mark True time. - P. Ildephonse Récollet.
The signs of the zodiac and the months of the year surround the dial as in Massena. 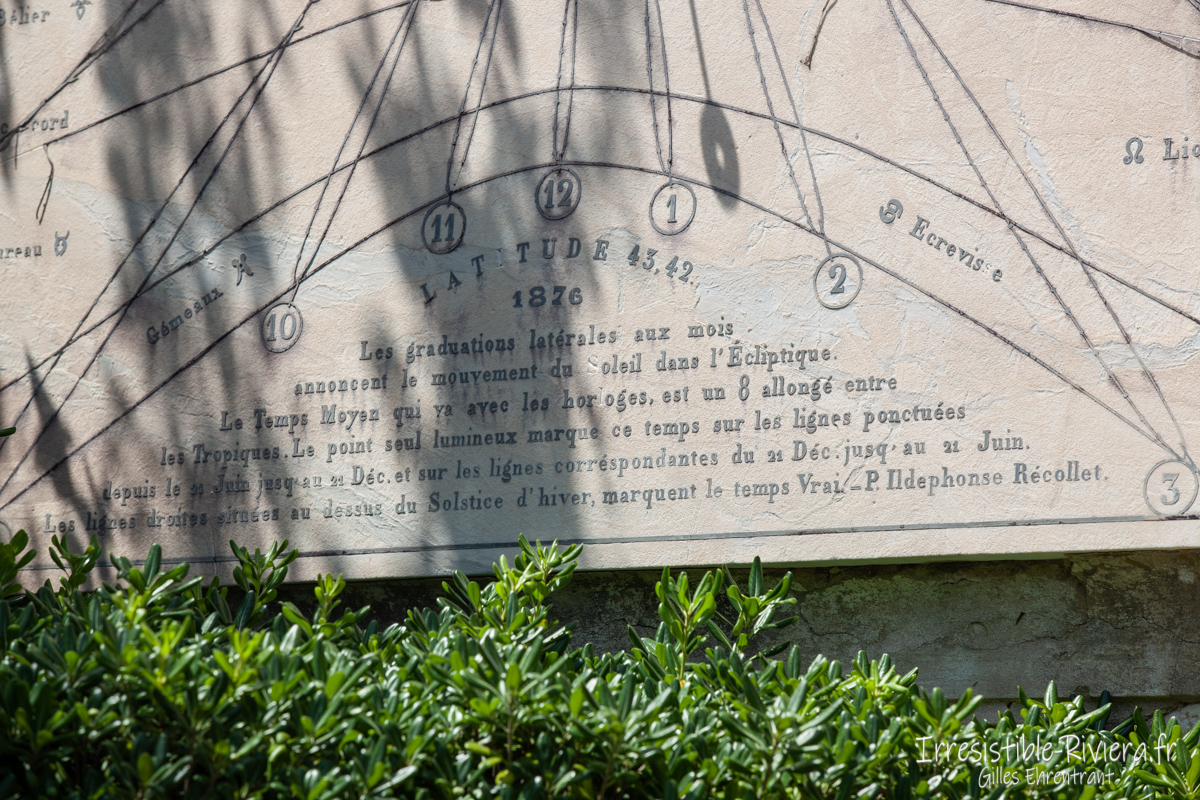 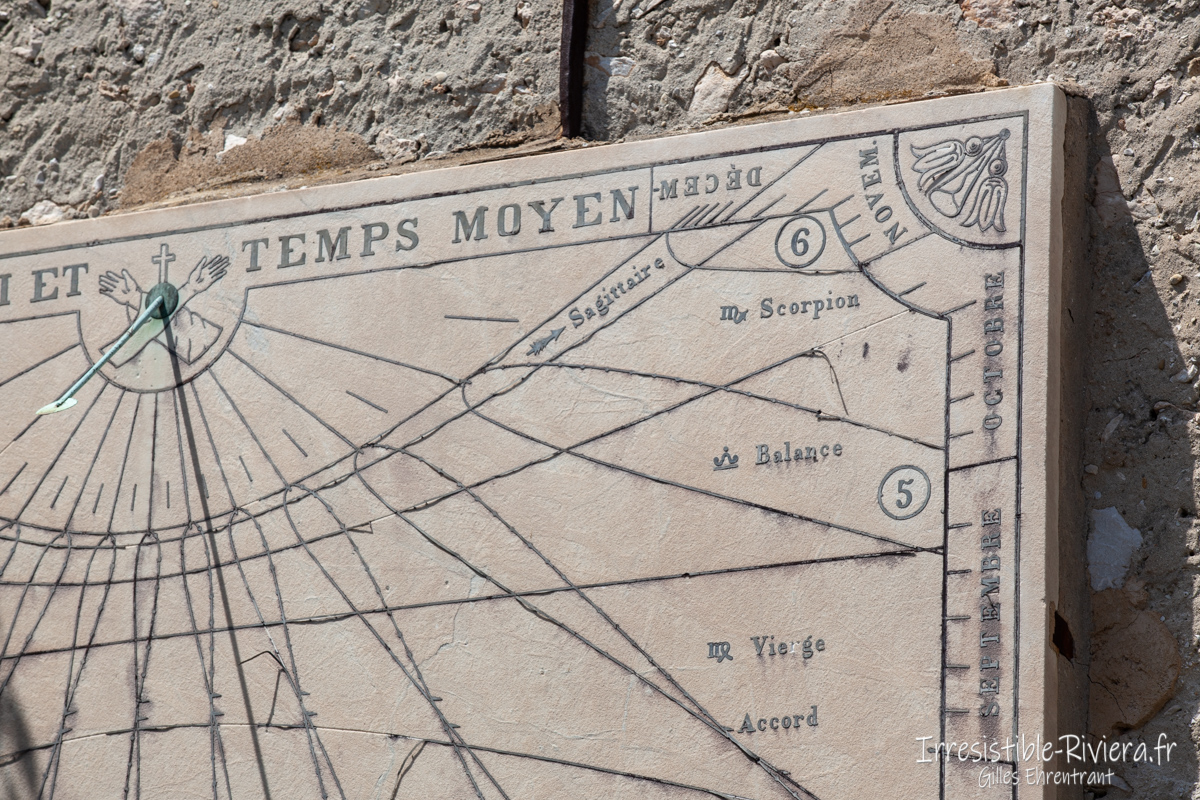 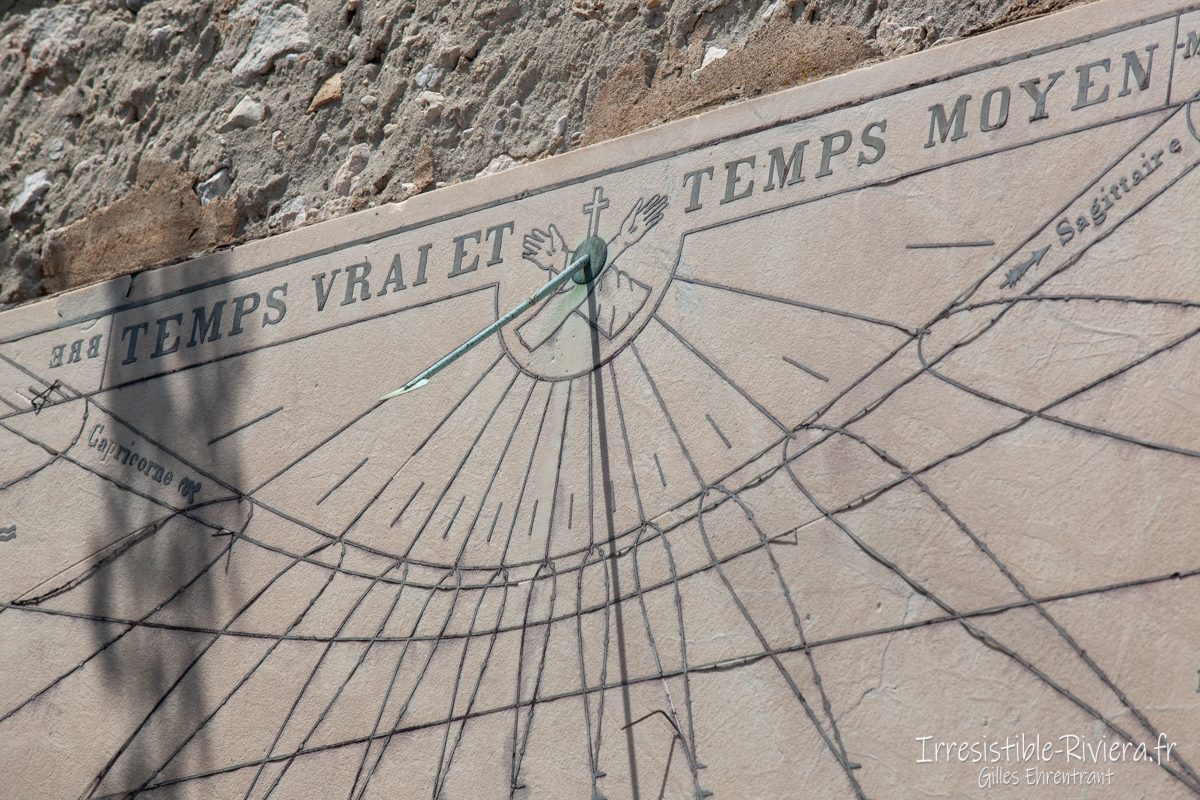 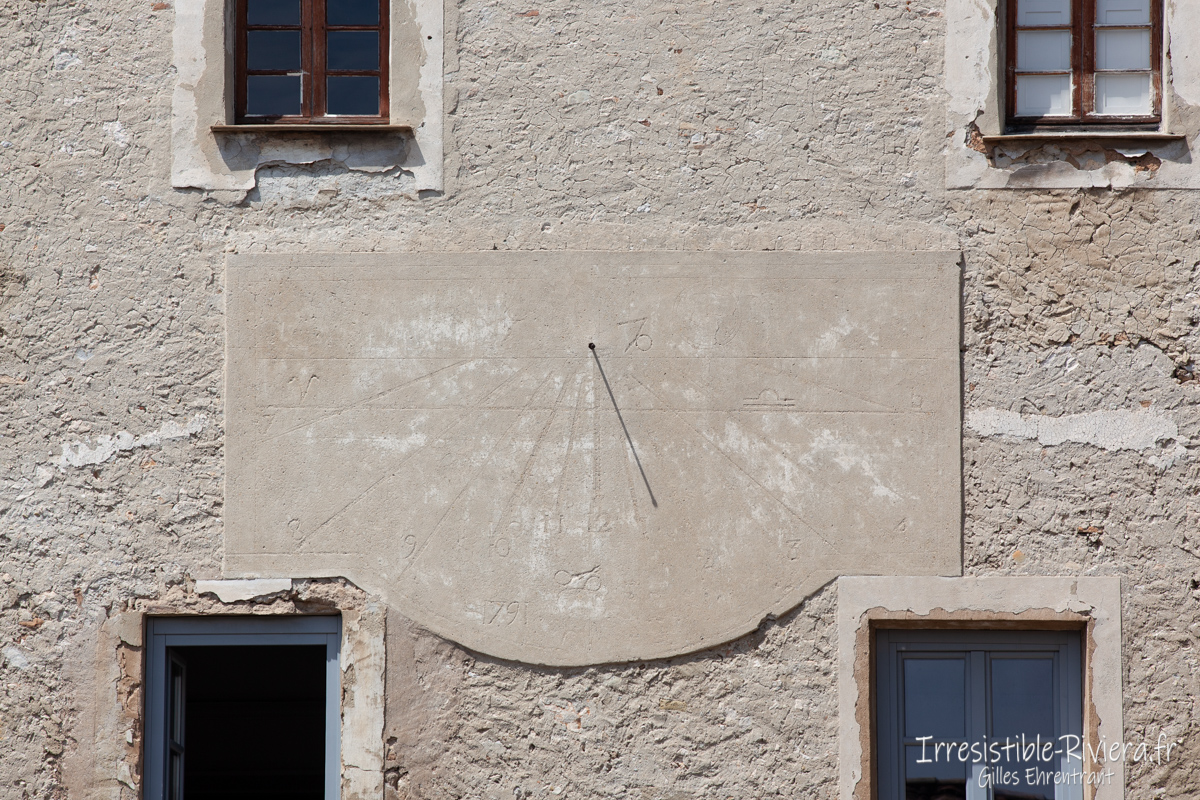 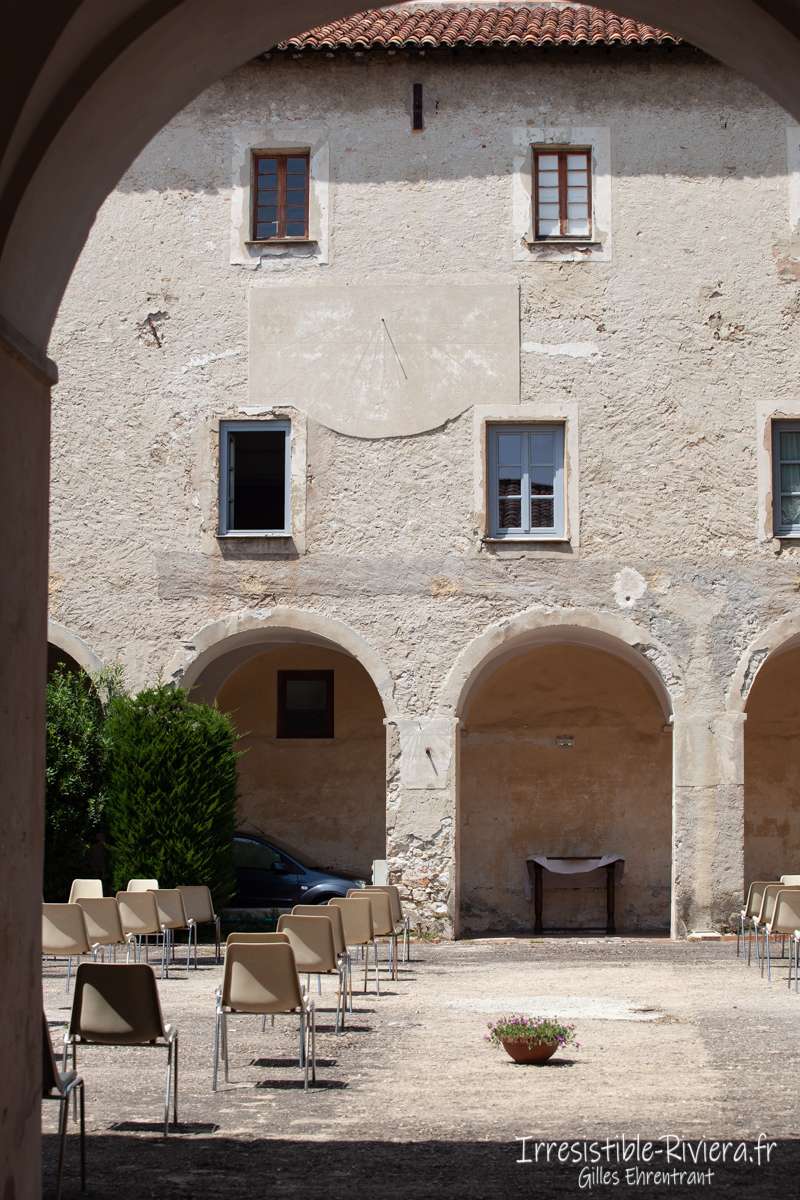 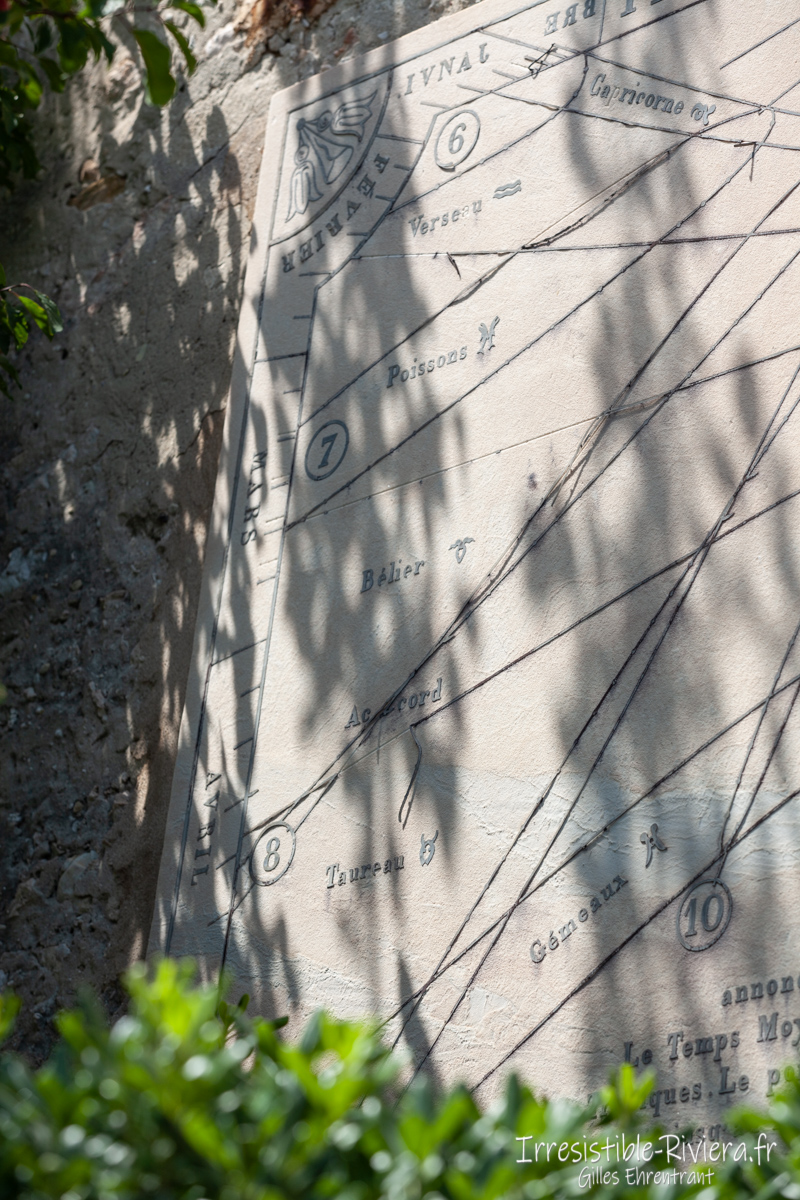 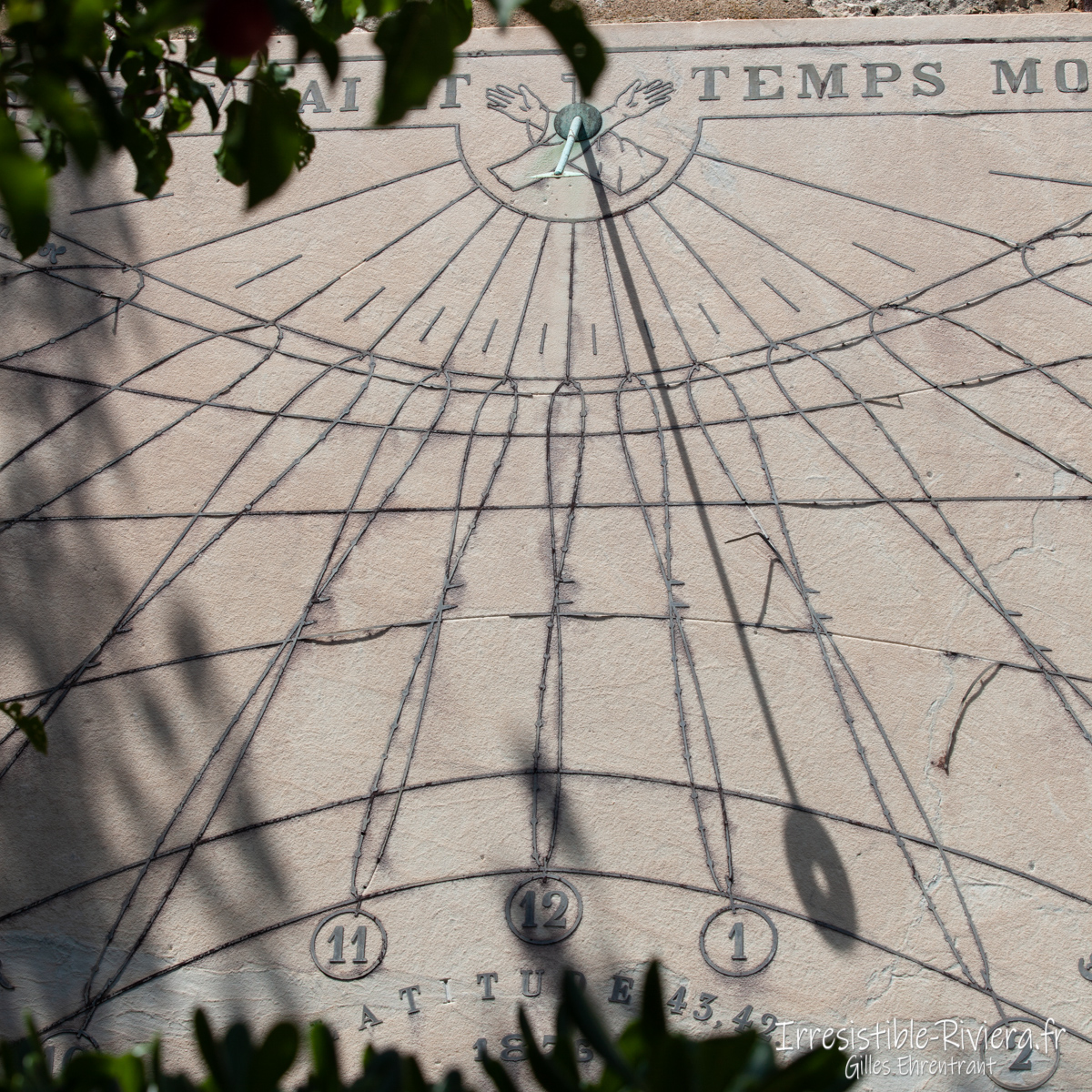 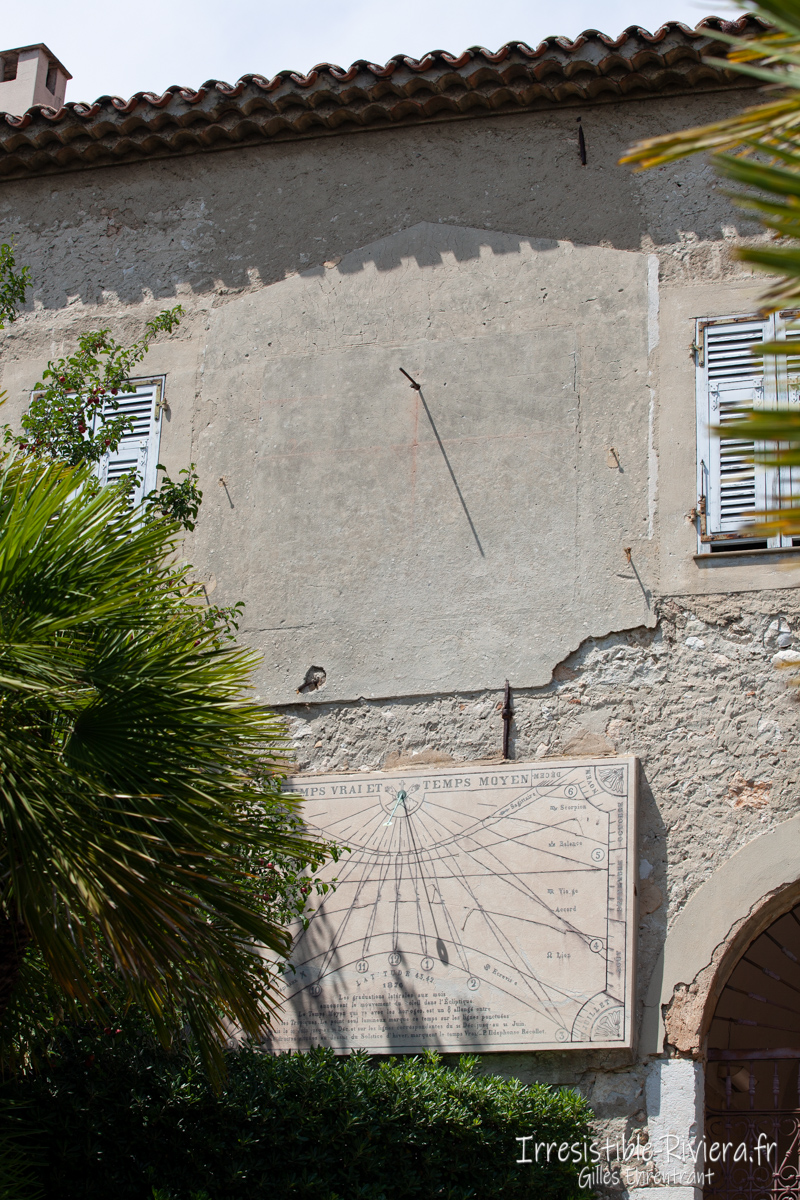 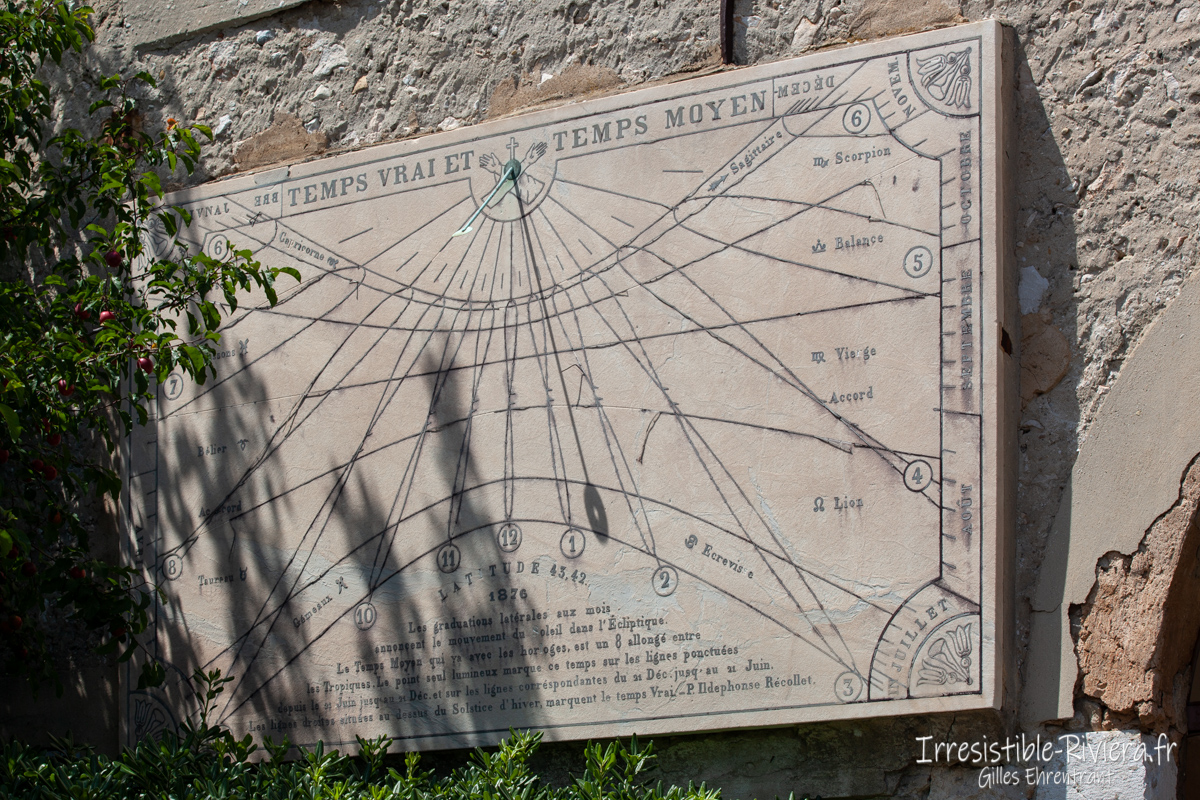 Virtual tours of the Nice sundials