Nice, city of expatriation: the example of Romain Gary

Reading of "La Promesse de l'Aube", an "almost autobiographical novel", published by Gallimard in the beautiful NRF collection, by Romain Gary who tells us about his mother, a lot, but also about Nice and the French Riviera . Some quotes and modest reflections concerning the Riviera ties of the adopted writer from Nice.

"The Promise of Dawn" by Romain Gary from Nice 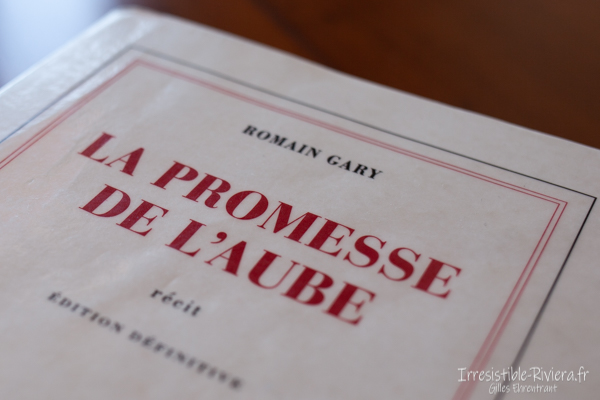 The story of a young Polish boy raised alone by his mother. We know the link between Nice and Poland, for example at the chapel of the Holy Sepulcher, place Garibaldi, or even at the level of the Majestic at the bottom of the boulevard de Cimez. A suffocating, excessive, certainly toxic but madly loving mother. Of a love that gives confidence and releases, gives wings. A mother who transposes almost all her desires for revenge on the world on the shoulders of this son who will end up as a French diplomat, an unconditional Gaullist, a war aviator, a famous writer and an adopted citizen of Nice.

Nice and France, Eldorado and promised land for many

Troubled period between the two world wars in the depths of present-day Lithuania with gray landscapes and this woman who promises this young boy the blue sky from here. A hectic life, far from a daily train, skinned alive with love for adventure, women and life. To die for. Romain Gary, whose library bears the name in Nice, evokes his memories of Nice many times. The boarding house run by his mother on boulevard Grosso, the Buffa market, the Lycée Masséna, the Promenade des Anglais regularly come up over the pages of "The Promise of Dawn". A small book to consult, "Romain Gary Promenade in Nice" published by "Baie des Anges", written by Carine Marret, the specialist, among others, from Gary to Nice, offers you an exhaustive overview of his journey on the Côte d'Azur .

Nice that makes the whole world dream. Nice inventor, in a way, of international tourism. Nice gateway between the Alps and the sea. Nice link between Turin, Piedmont and the Mediterranean. Nice inevitable passage between Provence and present-day Italy, and this since prehistoric ages as evidenced by Terra Amata and the Lazaret cave in the Port district. Nice and the Côte d'Azur, a land of asylum for both the international jet set and the hordes of tourists in search of wonder and riches, etc. The identity of the city is unquestionably passed through the world as she never stopped welcoming. If you had any doubts and rather than a long enumeration here, do not hesitate to consult the Wikipedia page devoted to Nice personalities to convince yourself.

Conquered by this breathtaking and beautifully written book, which we recommend you read especially for his look at Nice, we have retained some short extracts relating, among other things, the love of Romain Gary for Nice:

About Nice and the French Riviera 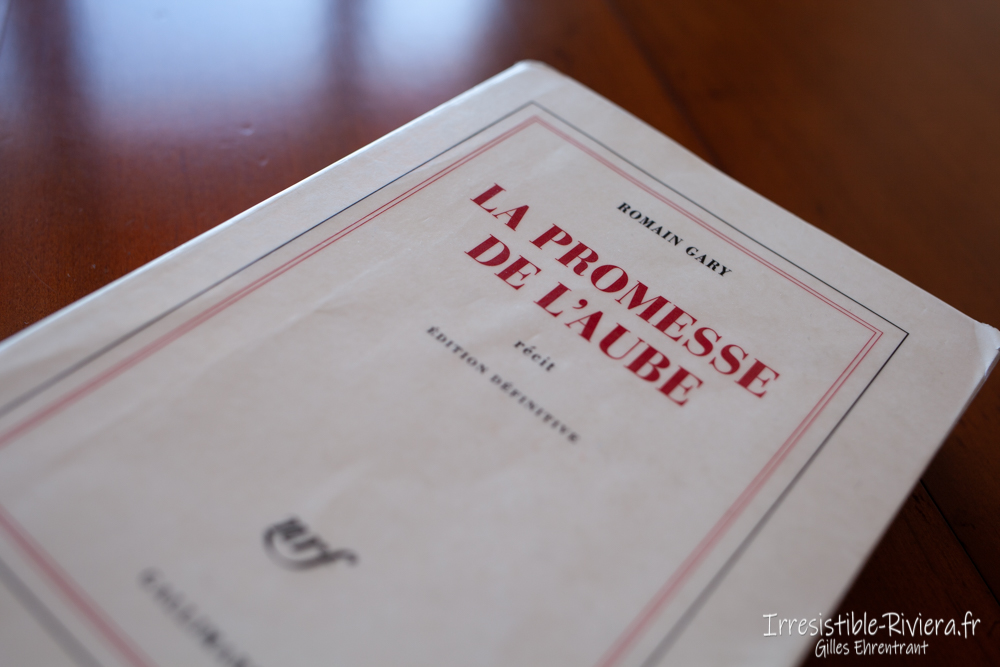 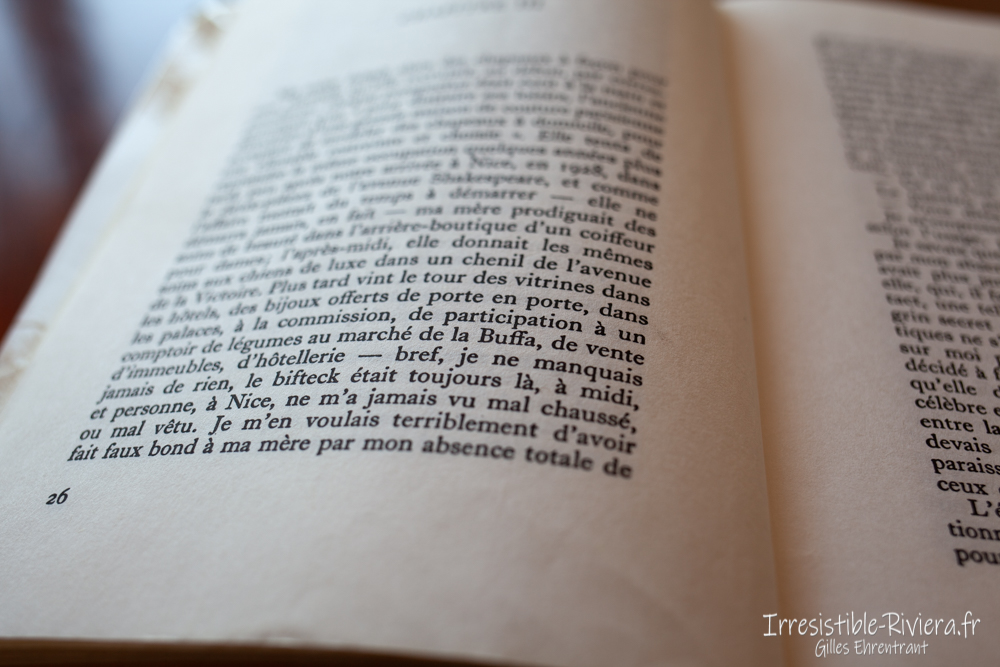 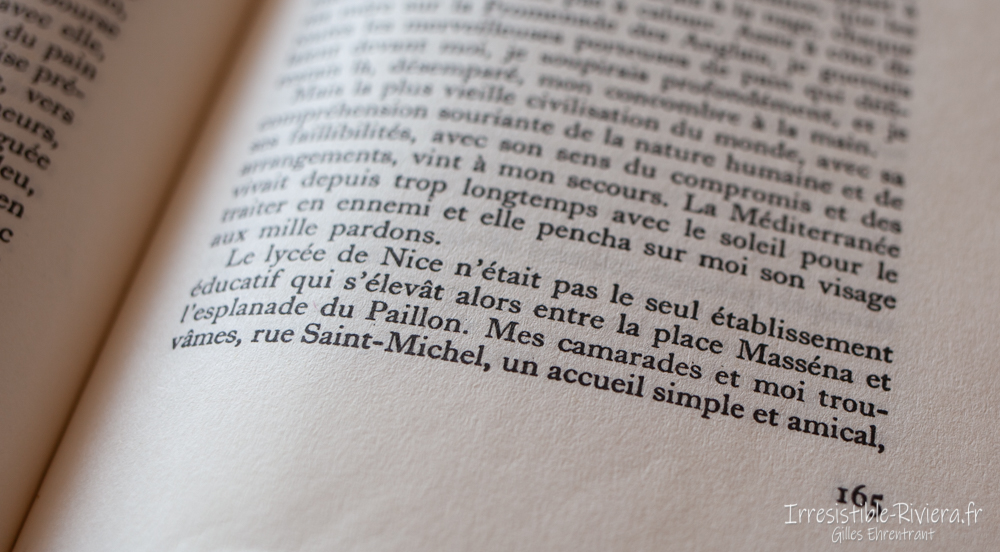 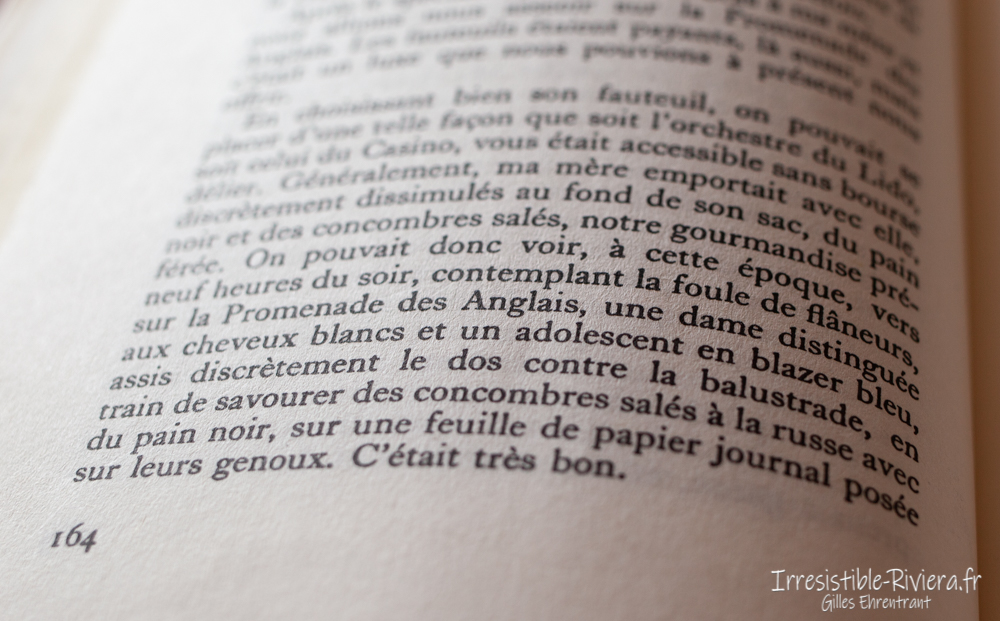