The giant of the air, among the largest planes in the world, crosses the blue sky every day at midday. Some video captures and infos for aviation enthusiasts and the curious!

A giant in the French Riviera sky 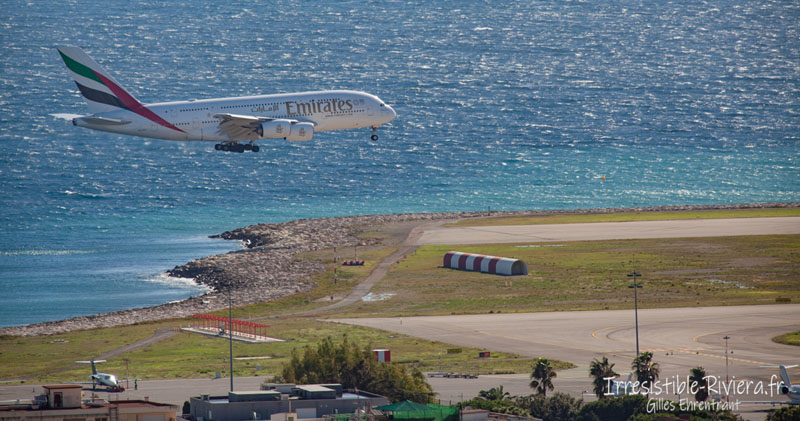 The big metal bird coming from Dubai usually arrives around 12:30, winter time, on the airport of Nice LFMN. It departs mid-day around 14:30 to the United Arab Emirates for a journey of at least 2660 nautical miles or 4790 kilometers and about 6 to 7 hours of flight, depending on the wind.
Small digression to note that a nautical mile is worth 1852 meters. This figure owes nothing to chance, but is obtained by placing itself at the equator or on any great terrestrial circle, whose length corresponds to the terrestrial circumference, that is to say about 40000 kilometers. This distance divided into 360 degrees then 60 minutes (1 ° = 60 ') gives 1.8520 km, the kilometric value of a nautical mile.
The Airbus A380 Emirates Airways seems for many as stopped, almost suspended, in the sky Nice. This is a small error of our brains. The plane is so much bigger than most other aircraft, often Airbus family A320 or Boeing 737, that it seems that it is moving very slowly.
Note also that planes never fly over the city (except for very rare exceptions) despite what a classic parallax effect might suggest.
To understand everything and know about the aerial approaches of Nice airport, we advise you to consult the excellent blog of "Lustu" here. This article takes the time to detail the peculiarities of the tracks, right and left 04 and 22 of the airport. The web and even more social networks, often poor and repetitive set, find with this kind of technical article a good example of quality and clarity.

An airplane of all superlatives

The A380-800 four-engine aircraft can carry up to 600 passengers and even more than 800 pax in certain configurations. With a maximum mass of 575 tonnes at takeoff and 394 tonnes at landing, it carries 320 cubic meters of kerosene. Its price varies depending on the options and configurations and it is around 390 million euros. Its maximum range of more than 15,000 kilometers allows it to connect many countries at a speed of about 1000 km/h ...
The aircraft powered by the latest-generation Power Alliance GP7200 (General Electric and Pratt & Whitney Group) dual-engine overpowered engines consumes approximately 3 liters per passenger per 100 kilometers driven, weighing 6 tonnes each with a diameter of over 3 meters (almost the diameter of the fuselage of the A320, 4 meters!).
More information on the Airbus website.

For a better rendering : choose the maximum definition by clicking on the small gear serrated .
https://youtu.be/cnclScMSqvE 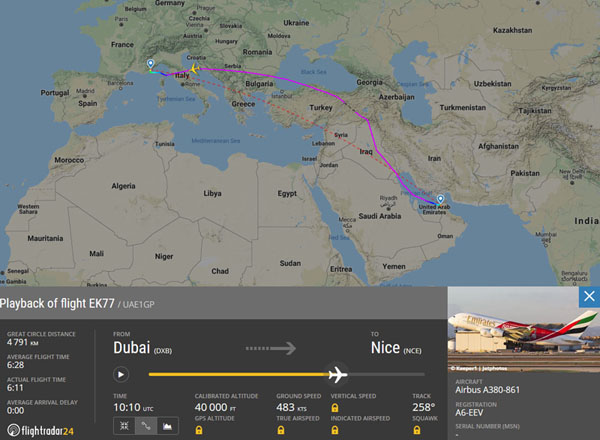 A free application, available both in IOS and Android mobile application libraries, but also on the internet, makes it possible to track the theft of all civil aircraft, including the A380 at destination (flight EK77) and from Nice (flight EK78). It is possible to anticipate the arrival of the plane to take a picture of it or simply to observe it. Flight 24 gives its position (with a slight shift), its altitude, speed and heading.
Note on the screenshot the trajectory from Dubai, the aircraft avoids the overflight of Iran and Syria.

A paid version even allows access to more information, including a virtual view and live from the cockpit.

You can also check the live weather at Nice Airport (Metar) and the latest Aeronautical Weather Forecasts (TAF), which are often sharper than the general public forecasts, by consulting the Metar and Taf. This is coded information of this type: LFMN 060930Z 33007KT 9999 BKN050 11/03 Q1024 NOSIG but that the Allmetsat website translates into current language.

It is also possible to listen to air traffic control messages live on this site, with a lot of training you will eventually understand what is said ... and what happens ... including coupling this with images of Flight24 ...

The Emirates company has a fleet of 113 A380s which connects about fifty destinations mainly from Dubai's true pivot, air traffic articulation between Europe and Asia. 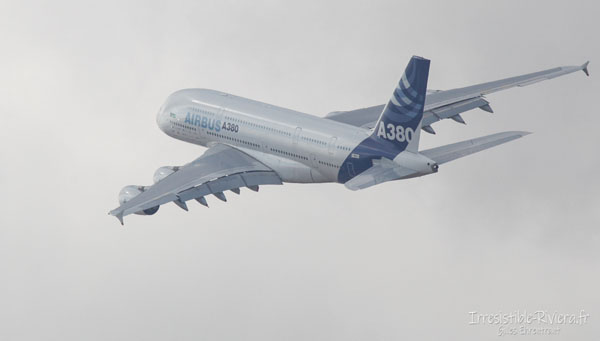 A project to extend the airport facilities in Nice was the subject of a public inquiry in autumn 2019.
Opponents of the project (municipal opposition, local environmental associations or @ CollecCitoyen06) fear a drastic increase in air traffic, a source of noise pollution, air pollution and urban congestion.
The city hall, the airport authorities, the Chamber of Commerce and Industry (CCI) argue that this extension would only concern a building for increased comfort of travelers and not the volume of passengers ...
The French Riviera, a land of tourism, with a very international identity, does not escape the debates linked to ecology and global warming, with long-term consequences that are unimaginable for the greatest number. Few of us manage to escape a great gap between deeds and words. A schizophrenia often reigns between big speeches and the individual and daily behaviors of everyone, not to mention the financial and electoral interests at stake!
The Gifas (Group of French Aeronautical and Space Industries), defending for its part the air sector, explains with the help of a synthetic brochure in French language "Stop the conventional wisdom on air transport! The True of False! Air transport pollutes only 1.4%, and carbon offsets are numerous and effective. That aircraft always pollute less. Feel free to consult each other's arguments unless your opinion is already stopped...

Some photos of the A380 in the Nice sky

Views from the hills of Nice and the seaside. Hoping maybe one day access aboard, especially in the cockpit to complete this small collection of images. If an Emirates Airways leader reads these lines,  do not hesitate. 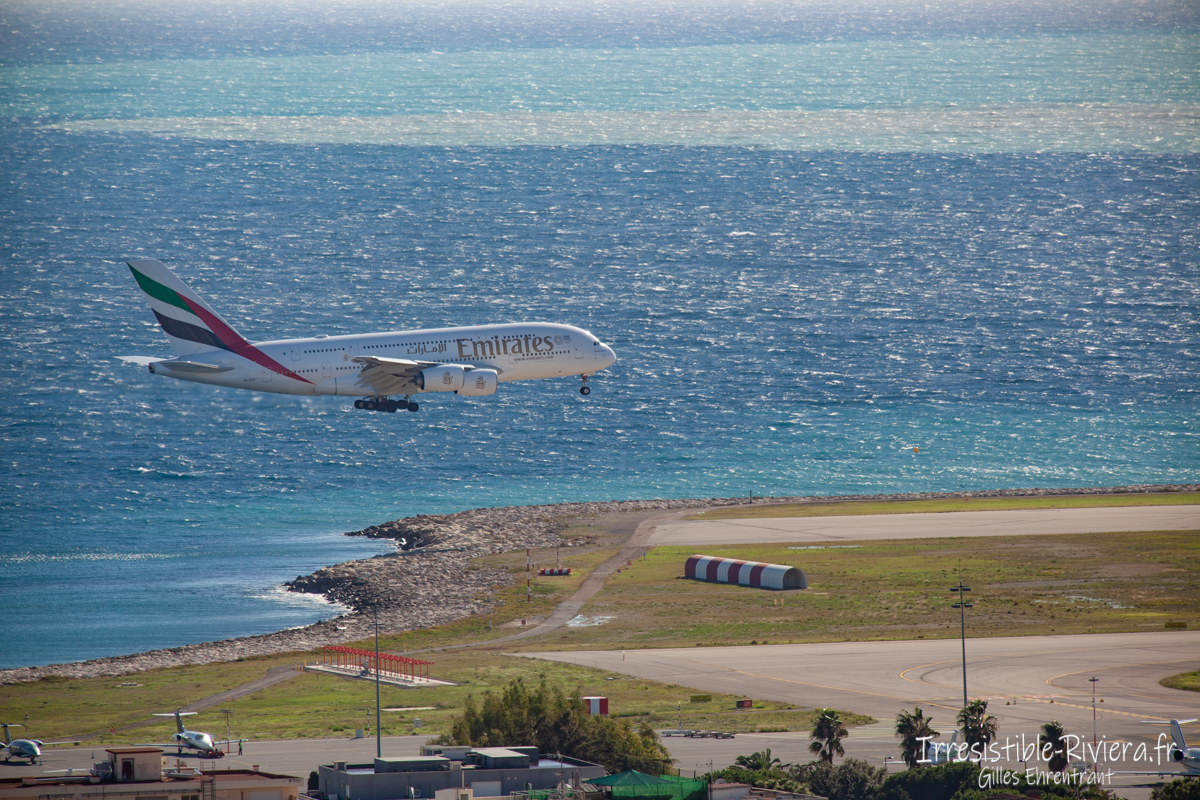 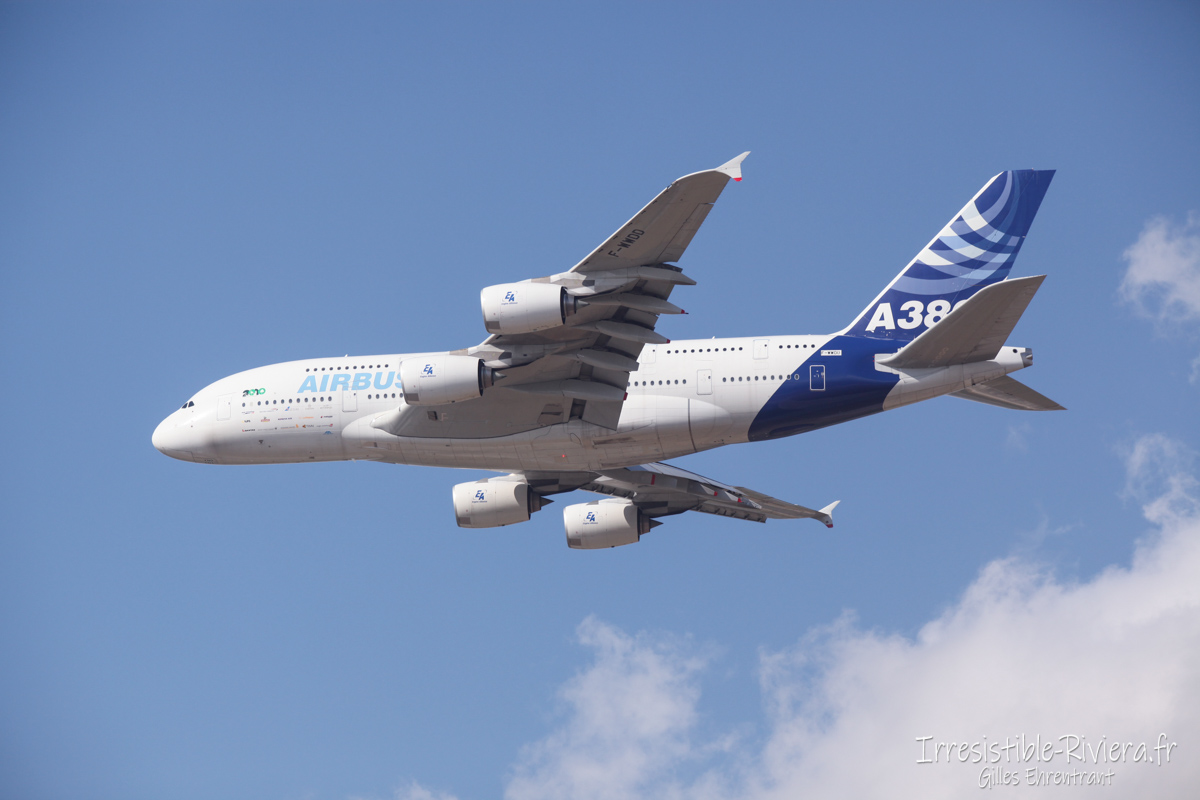 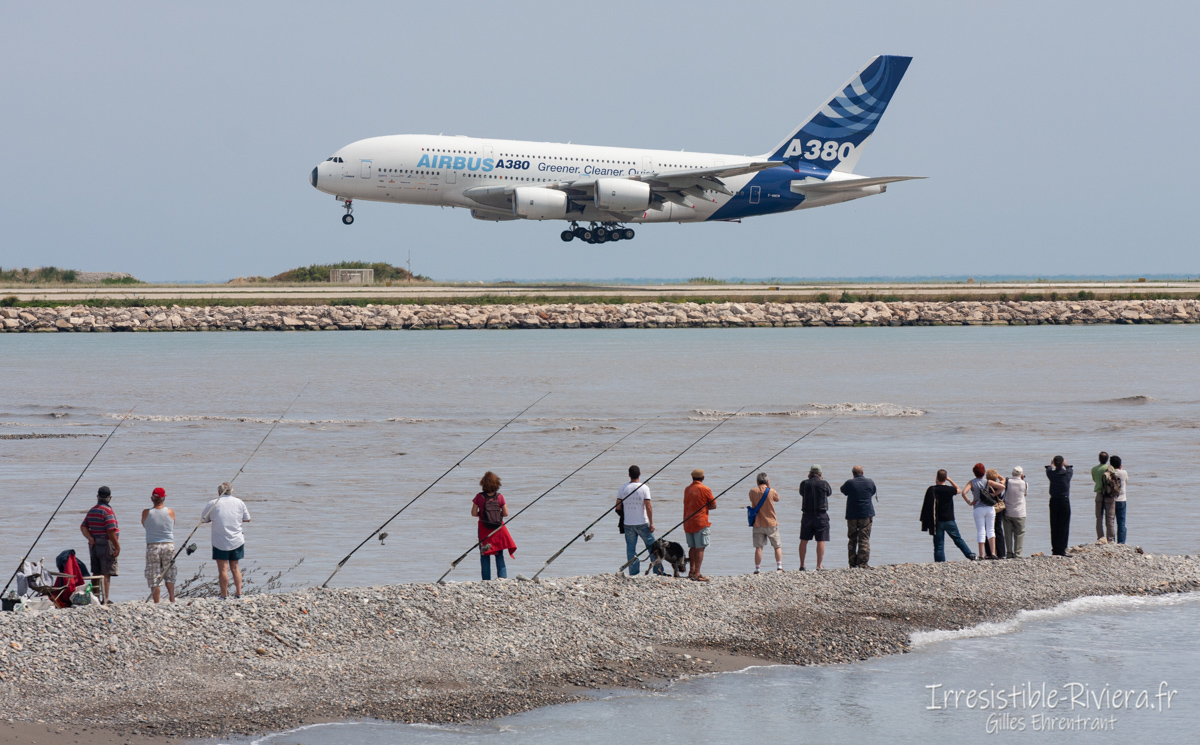 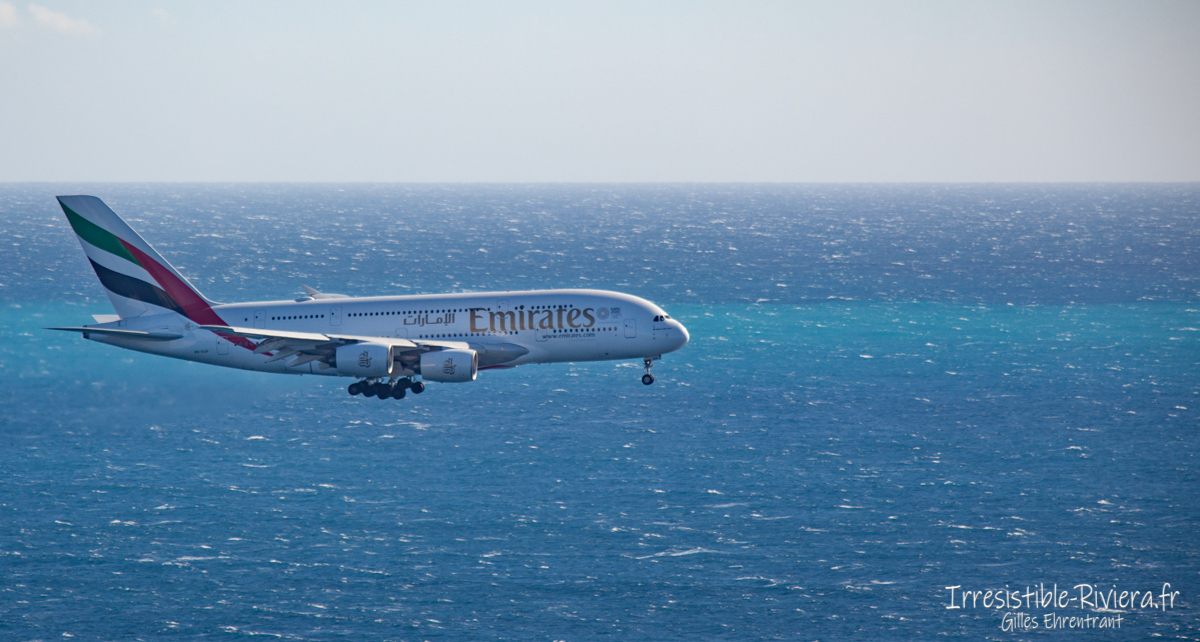 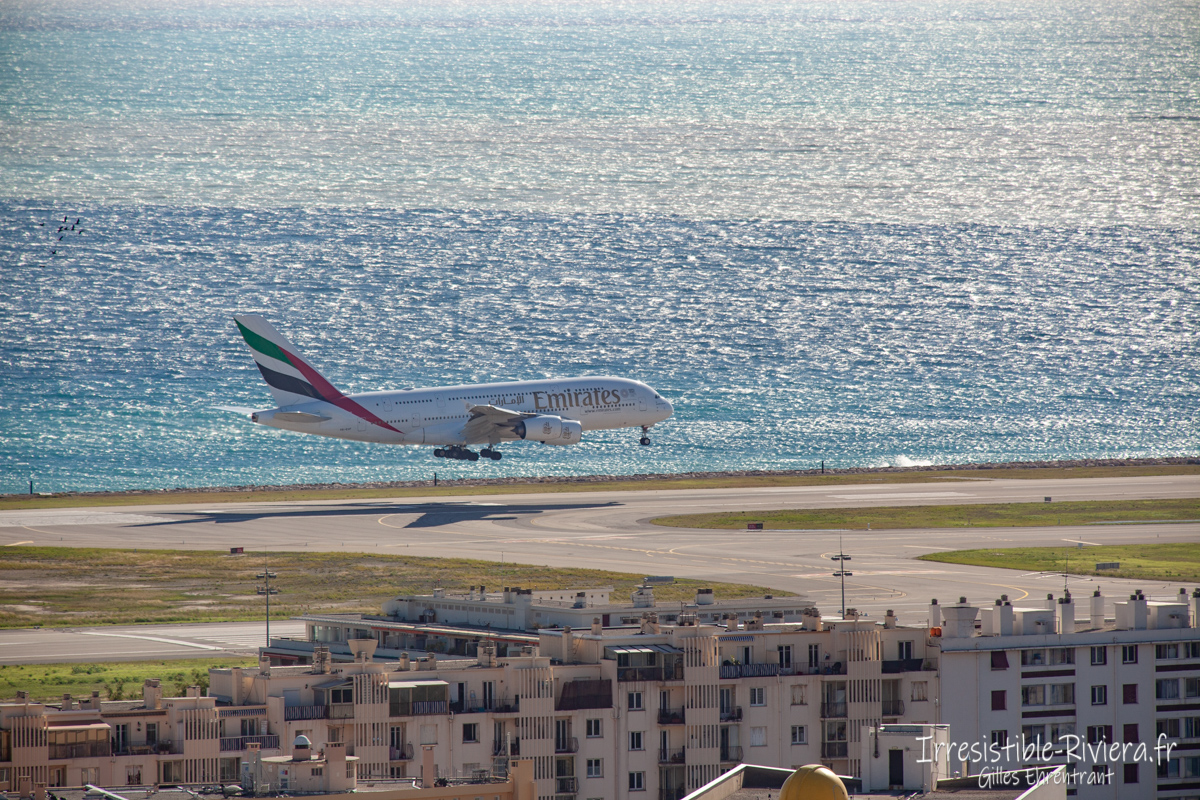 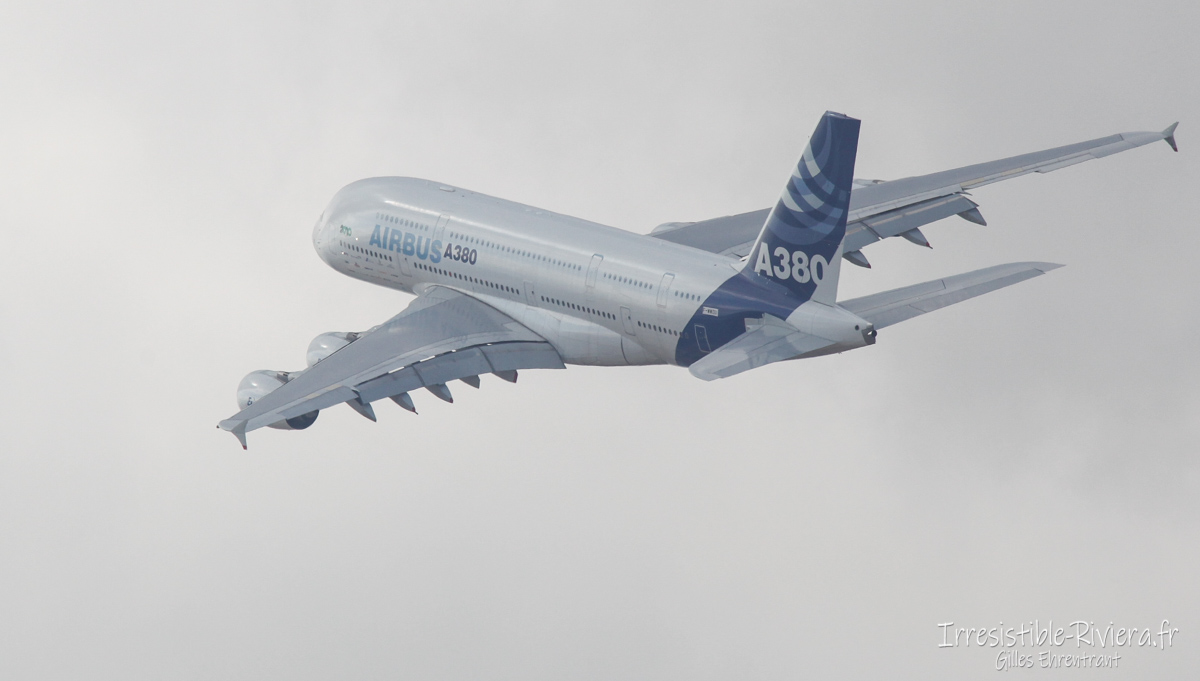 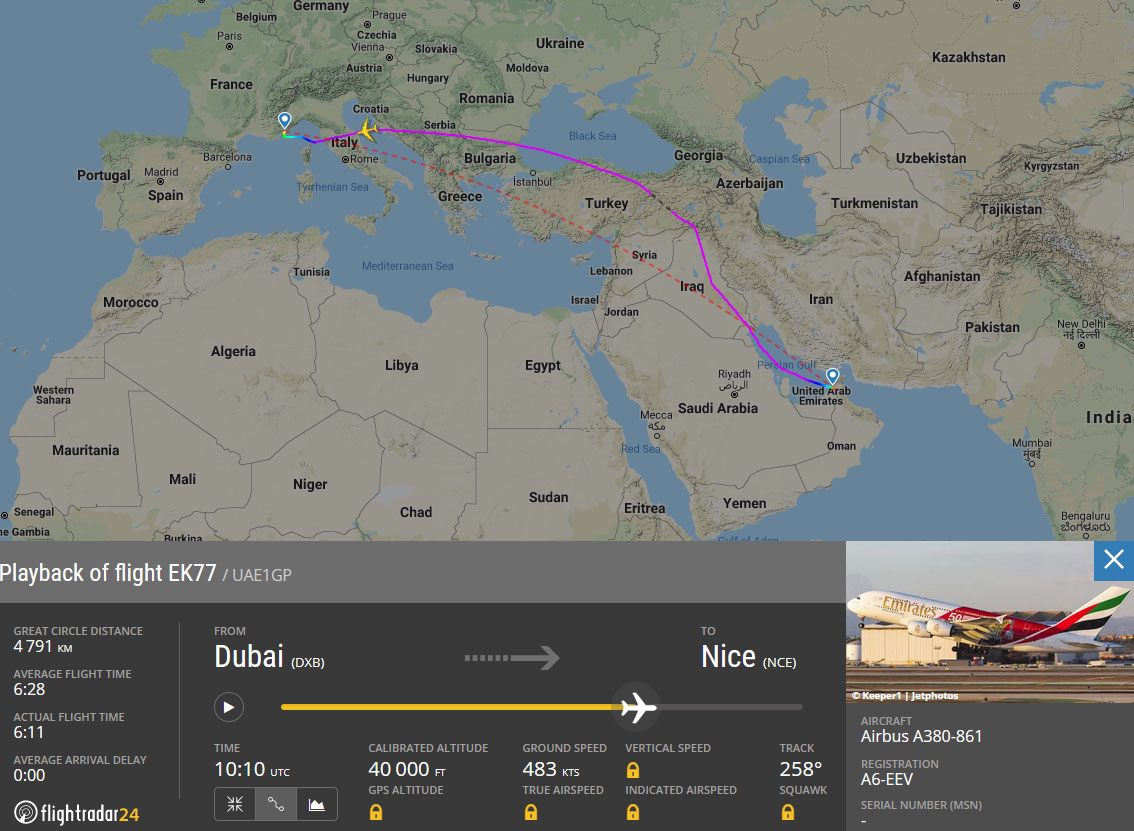 Aviation on the French Riviera 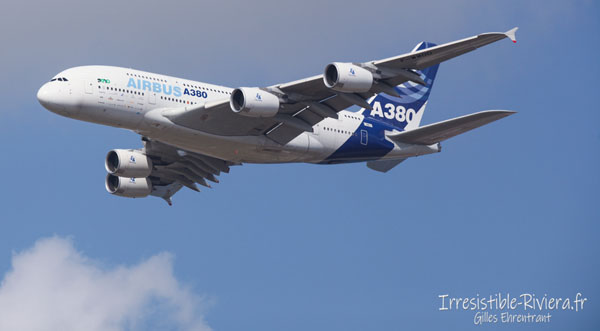 Aviation enthusiasts on the Côte d'Azur for lack of long transcontinental trips can still afford a first flight from Monaco or Paragliding from Gourdon or the heights of Roquebrune Cap Martin.
A gliding platform, proposes to get laid in glider and ULM Fayence, Var commune close to Grasse. The  Cannes Mandelieu airport divides the traffic of the businesses jets with Nice, shelters several flying clubs, schools of piloting plane and helicopter but also the air base of the civil security of Dragon06 devolved to the rescue ...