Contrasting tests of electric blue bikes in the French Riviera capital. A few words, images and feedback where we see connection difficulties between the application and the bike, too low availability rate and power unsuitable for certain steep slopes of the hills of Nice. 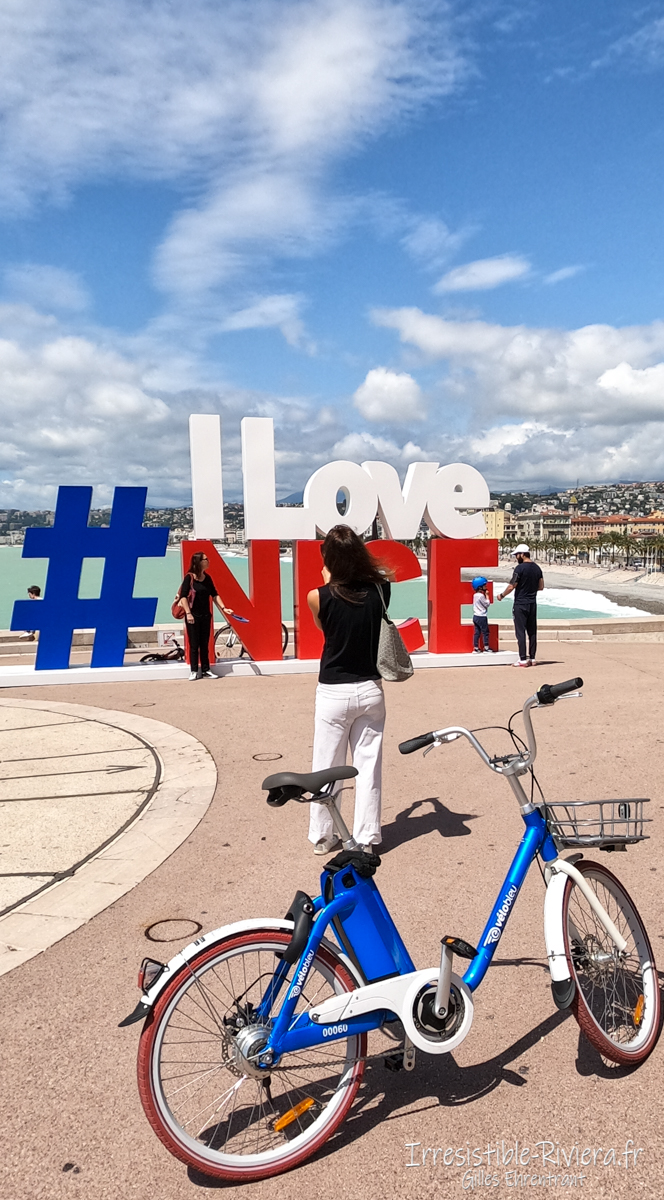 Inaugurated at the end of January 2020, the self-service fleet of electric bikes from Nice includes around 200 bicycles in Nice, Saint Laurent du Var and Cagnes sur Mer (municipalities forming part of the Nice Côte d´Azur Metropolis). It is a boundless system known as "free floating", meaning the possibility of choosing a drop-off location at the end of the rental, provided that it is authorized. They have a theoretical autonomy of 60 km when the electric recharge is maximum. The rates are quite advantageous with a daily subscription of 3 euros or a year of 40 euros, free for students, under 25 and apprentices. First half hour free, then the following half hours cost 1.5 euros. The service is implemented jointly by the company Transdev and by the Métropole Nice Côte d´Azur The bikes themselves are designed by the company Oribiky, made in China.

Registration is done from your mobile phone application. You must enter your marital status and your bank card details. Registration is smooth. The price, usually 40 euros, is reduced to 10 euros for holders of a classic blue bicycle subscription, TER subscription and the Azur line. Without knowing, moreover, how does this offer work and what proof to provide, how and where? This aspect of things had temporarily dissuaded us from subscribing before covid19 confinement. Reading some comments from Internet users it seems that it is necessary to provide a screenshot of its classic blue bicycle subscription, too bad the two files are not interconnected ...

The bicycle, its ergonomics and its electric assistance

Civics and respect being fairly objectively part of fairly rare qualities, we can imagine the difficulty of designing a bicycle intended to be shared by all on the public domain... Too fragile and perfected will lead to repeated breakdowns. Too robust, functionalities and uses too limited... Inevitably, except to believe in Santa Claus, a bicycle for public use cannot have the same functionalities as an individual electric bicycle... The bicycle of reasonable size is quite handy and s rides easily. Its center of gravity seems to us quite low which favors its maneuverability. The saddle adjusts in height quite easily with an amplitude which seems to us to be suitable for sizes going from approximately 1.55 meters to 1.90 meters maximum. A basket may be too small at the front. Two powerful disc brakes will surprise the regulars of classic rubber skates. Regulatory light at the front and rear. An indication on the frame limits the use, to more than 18 years and at least 110 kg, while the site indicates a use from 14 years. In the end the bike drives with pleasure and ease in the streets, tracks and cycle lanes of Nice. The mechanical and ergonomic design of the machine seems to us to be a real success.

Use of electric blue bikes in Nice. Four problems identified:

Usually enthusiastic on this blog (too many will say some!) And after several inconclusive tests we can say that the service of blue electric bikes is, at least from our own experience, "complicated" in the French Riviera capital at the mid July 2020.

We will not fail, if necessary to modify the info below if our experiences or info evolve in one direction or the other ... 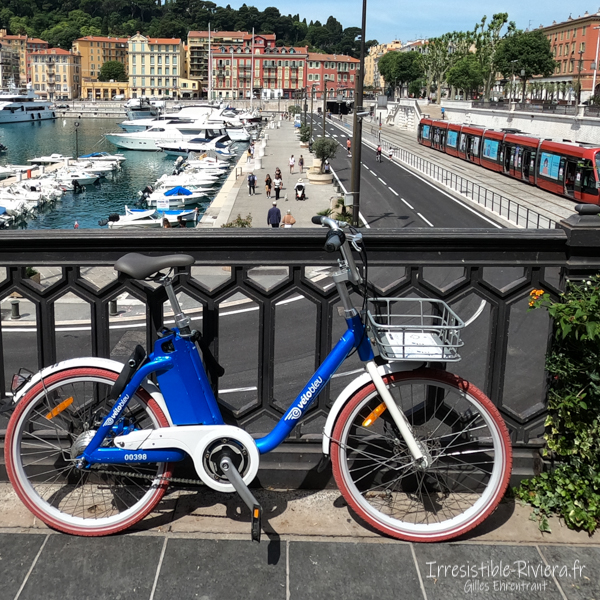 The main problem encountered concerns the connection of the bicycle to the phone and vice versa. This results in difficulties and sometimes impossibilities both to initiate the rental and, more seriously, to complete it. Our smartphone also works normally on other applications in Bluetooth mode. We therefore find ourselves in the situation of trying to do it many times to borrow the bike but above all not being able to lock it and return it. With the risk, therefore, of being held responsible for its theft or loss. It is indicated on the official website to call 04 93 72 06 06 who then politely tells you ... to contact the service by email via the form on the site to request the end of the rental ...!

Tip 1: A small string, hidden in the frequently asked question, signals that by pressing twice on the very discreet button (black on black) of the padlock, at the back of the saddle, it locks or unlocks and that you must then finish trying again, via the application on your phone, to end the rental. Our tests have turned into Kafkaesque sketches ... It seems that we are not the only ones to have suffered this situation ... The question arises as to whether this is a hardware problem at the level of the bike transmission terminal or a software problem with the software and applications managing this interface between the bike, its user and the control system? Users have told us that they have suffered a penalty related to this problem and have resolved it quite easily by contacting support ...

Until these problems are resolved, one solution is to contact the Oribiky support department directly. The very efficient, dynamic and friendly online manager generally responds within a minute and remotely resolves your problem. We found his number on the IOS app reviews. Difficult to give it to you here but in a few minutes you will find it online on the Evelobleu app reviews.

No controversy or bias on one side or another on our part ... It is possible that the system malfunctions with certain application environments (Ios, Android ...) or that certain series of bikes are more involved ... Always is it that our feedback is at the very least mixed ... Other users also testify in this direction ... And to be honest some indicate that it works rather generally well. Few, but not nonexistent, are those who told me that they never suffered any malfunction when they finished the rental… Our tests were carried out from a relatively recent smartphone (two years) from Huawei brand P Smart model running Android 9. The people crossed who indicated almost normal functioning were equipped with recent and rather high-end smartphones. Blue e-bike should perhaps be inspired by Cityscoot which offers a perfectly functional system with all types of smartphones, tests and feedback on this blog.

2 / E-VéloBleu: electric assistance that lacks power for the steepest slopes 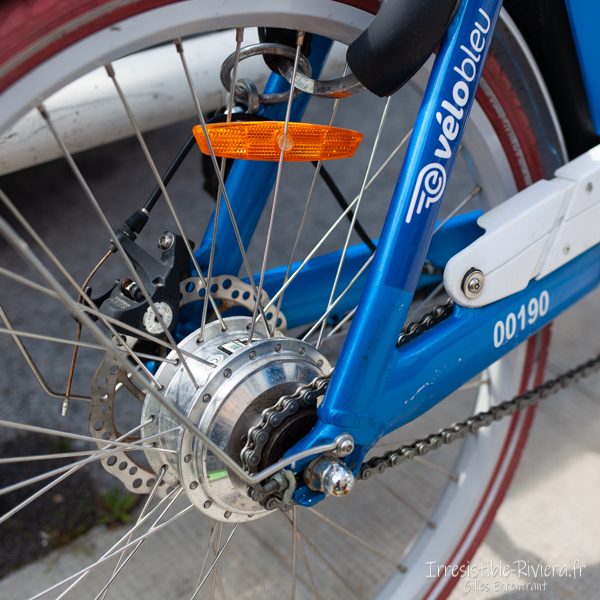 Unlike electric bikes for private use, there is no indication on the bike to know the battery level. However, an indication exists on the application indicating the autonomy in km. The percentage concerns the energy available for the padlock battery. This is confusing, users very logically imagine the percentage linked to the battery charge ... It is also not possible to measure the degree of electric assistance, probably to avoid adding a fragile element on the machine. During our tests, bikes had very little motor assistance, almost zero, while the application indicated more than 10 km of autonomy. The other attempts convinced us on a flat, for example along the promenade des arts, the promenade des anglais. The E-bikes tested allowed us to climb without problem for example the boulevard de la Madeleine or, steeper, from Cimez towards the monastery and the arena park in the area of ​​the Matisse museum. On the other hand, the steeper, really steep sectors are impassable at least for an average user ... not to mention the elderly. Is this a setting or the intrinsic power available? In any case, this deprives the inhabitants of the many hills of Nice of a really easy use. At least in our test configuration ... Bikes should be recharged more often. By browsing the application and at the time of writing, the recharges (autonomy in km) are often low and the unavailability due to numerous malfunctions… The situation seems, however, to have improved since the end of the two hours free (effective post-containment measurement until the end of June 2020). We do not recommend electric bicycles indicating less than 20 km of range. Indeed we note that at this level of autonomy the electric assistance is weak or even zero ...

Tip 2: In case of lack of electric traction and to try to reset the electric system of the bike (Faq on the site): pedal 10 seconds in reverse then press the silver button located on the battery ... 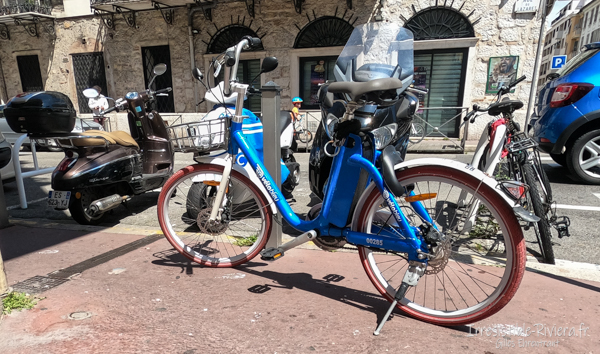 There is also the question of authorized parking spaces. It seem that the municipality, rightly fearing anarchy, prejudicial to pedestrians and to a certain urban harmony, has decided to give up completely free parking. We see for example in some cities (Paris for example) a real problem with scooters and electric bikes bulky sidewalks. As a result, the city of Nice has banned free floating scooter services. You must therefore complete your rental by dropping your bike in an authorized space. This notion of authorized location seems to be problematic because it is too imprecise. The website does display a map of the car parks, which is not zoomable and is too detailed. In addition, a large number of bikes are currently stored in places other than the locations on the said map. When returning the bike it is possible to declare a new location, by photographing it but the application often bugs at this stage ... at least on our mobile ...

Users get lost and risk a penalty of 50 euros for each use, if the E-Vélobleu is parked in an unauthorized location .... We regularly see E-Vélobleu not attached to a hoop in a situation of total free floating… An article to come on this blog concerning Nice cycle paths and two-wheeled parking. 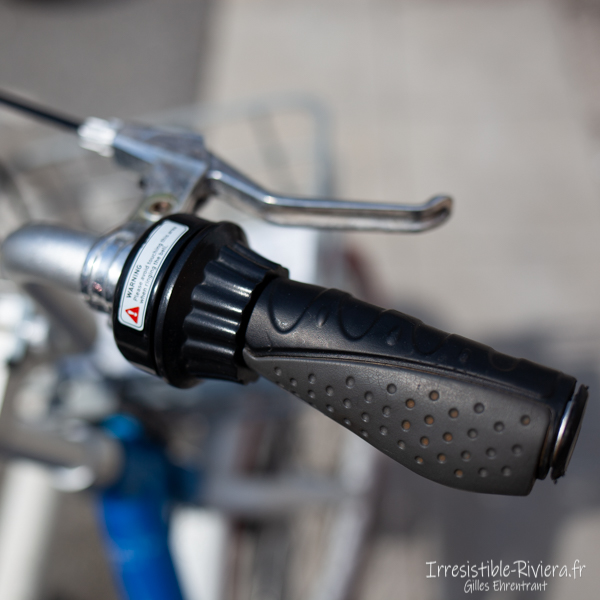 Note that we sent three unanswered emails via the E-Vélobleu website. A single, responsive contact would greatly improve the customer experience. The reception at Thiers central station at the blue bike office is always friendly even if the employees on site unfortunately do not have their hands on the entire system ... The maintenance staff on the ground work hard and are friendly and helpful. The digital world multiplies the importance of support and after-sales service. Good support often more than compensates for a product that could be improved. This is true for both hardware and software ... The digital world is often made up of software overlaps that must be constantly updated during the activities of webmaster and web integrator. This is application maintenance; real mikado to make a digital system secure, multi-compatible mobile, multi-platform, IOS, Android etc ...

Inevitably Rome not having been built in a day, any system requires a certain running in and time of installation. Even if the commissioning is now 6 months old. The ergonomics of a system should allow users, more or less gifted, to use it easily, simply and without problems ... Faced with this kind of testimony, it is possible to deny everything in a row, to scream at the plot or more prosaically to try to solve the problems… Just browse the internet and consult the detailed negative opinions to give an account of the situation. Admittedly the dissatisfied express themselves logically more than those for whom the system works but this should not be used as an excuse to make the ostrich ...

In conclusion, it seems to us that this promising system, largely financed by taxpayers, deserves improvements in particular in terms of rendering as well as taking the bike but also maintenance (staff, organizations ...?) And actual availability rate of machines.