One of the magics of the French Riviera lies in the proximity of the mountains that plunge into the Mediterranean Sea. The area of Authion accessible from the Turini pass offers a breathtaking view, like a first morning of the world. The big blue opens 180 ° from Provence to the Gulf of Genoa, not to mention Corsica visible a few days a year. 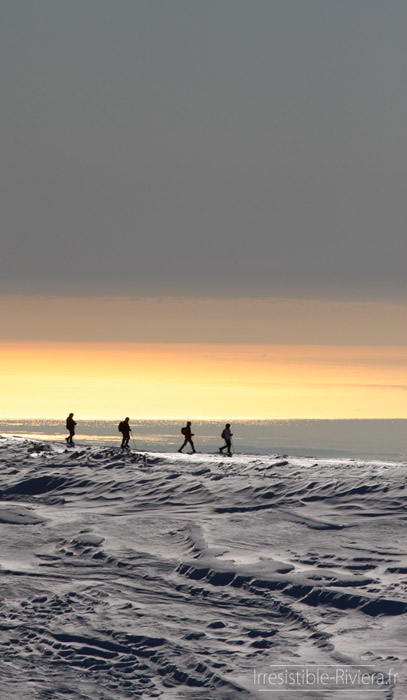 About fifty kilometers from Nice, passing through Lucéram, a village renowned for its Christmas cribs, allow about an hour and a half to reach the Turini pass. Continue a few hundred meters, on the D68, before parking at the barrier, sector of the "Drop of Silver Camp" at the edge of the Mercantour National Park. Walk about 4 kilometers and 200 meters vertical drop to reach the sector of the summit of Authion at 2075 meters above sea level.

The walk can be done in any season but our preference goes to the winter period (if not sure ask help with a professional guide). When the sky is adorned with its brightest azure blue and the north wind blows without much force, the panorama emerges with a 360 ° view. The sea turns orange and shades of gray compete with nuances and gradients. The Mercantour massif in the north all white snow accumulated but also Corsica in all its width from Cape Corsica to the area of Porto without forgetting the islands of Elba and Capraia Isola will offer to your eyes. Towards the west, the Bay of Angels, Cap d'Antibes, the Estérel Massif, then the Gulf of Saint-Tropez bears so close Provence ...

A place steeped in history

The area has been the scene of many battles for centuries but also during the last world war. Several fortifications in ruins still occupy the places (fort of the Redoubt, Camp of the Forca etc.).
Be careful not to venture into the ruins for fear of collapse and blunt scrap objects.