Visit the Chagall Museum in Nice

Slightly up in the city, at the foot of the Cimiez hill, is one of the most beautiful museums in Nice. Large brightly colored paintings, very inspired, will give you, if necessary, energy overflowing.

Chagall a painter with varied and multiple origins 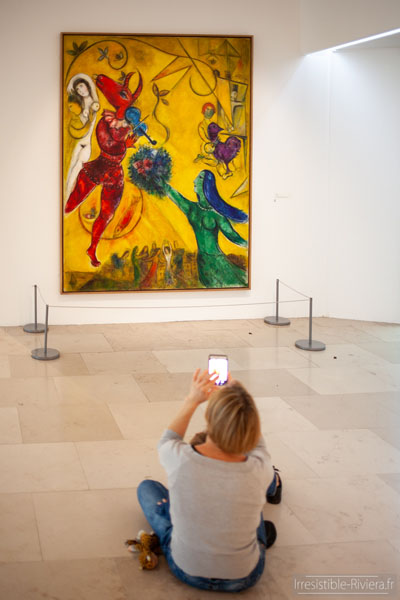 Hasidic, a native of Russia, Chagall arrived in Paris in the 1910s and attended Blaise Cendrars, Guillaume Apollinaire, Delaunay ... He acquired French nationality during the inter-war period, then exiled to the United States to flee anti-Semitism . Back in Europe in 1948 he moved to Vence and died in 1985, aged 97, in Saint Paul de Vence.
Chagall on the wikipedia online encyclopedia.

Chagall, fantastic colorist, expressing an ode to the joy of living

A very positive and cheerful atmosphere arises from the visit of the Marc Chagall National Museum. The large and colorful works illuminate the area. The artist communicates his joy of life and a little of his madness through scenes all more fantastic than each other. These works, mostly inspired by the Bible, represent angels, mixed with musicians, animals, flowers ... His work as a colorist is reminiscent of Jules Cherret's paintings, all in nuance visible at the Musée des Beaux-Arts at the other end of the city.
The museum was built and inaugurated in the presence of the painter in 1973, but also André Malraux, Minister of Culture of General De Gaule. Of rather crude form, its architect is André Hermant close to Le Corbusier.
The venue, which hosts the world's largest public art collection, is located on one level with the garden. Chagall's biblical message occupies the permanent collection divided into several rooms, while the temporary part is located in another wing of the building. A pretty auditorium lined with stained glass of the artist hosts all kinds of cultural events in the form of conference, concert, dance show and even showing movies. A nice garden and its small bistro will allow you to enjoy the sweetness of life in Nice before a meal or a drink.

The museum's website is very complete and will allow you to better prepare your visit.